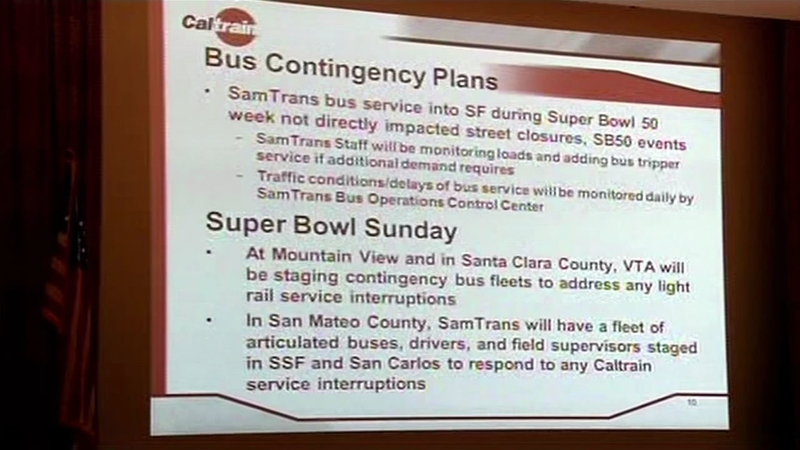 SAN CARLOS, Calif. -- There's a big push to prepare for an onslaught of riders during the week of Super Bowl 50, which is exactly one month away. The big game will bring big crowds to the Bay Area and, according to Caltrain, also a big financial loss.

The region has seen big crowds for San Francisco Giants victory parades, Bay to Breakers, and other one-day events. But Super Bowl week could be both expensive and a major challenge for two rail systems -- Caltrain and VTA light rail.

Planners are estimating up to 1 million people will be travel between San Francisco and the South Bay during Super Bowl week to take in a week of special events and concerts. And that's during the work week.

Caltrain, for example, is already at capacity. It carries 60,000 commuters on a typical weekday. Something may have to give.

"We're going to see issues on 101, on 280, on the bridge, on BART coming from the East Bay," said Chuck Harvey. "So I think a lot of employers and employees are probably going to have to make some choices. And if they have an ability to be flexible, they might want to think about that."

Harvey briefed the joint powers board that operates Caltrain that it will cost the agency $400,000 to $500,000 to cover the costs of adding service, paying overtime, and providing other support. It won't get any reimbursement from the host committee or the NFL.

"Certainly Caltrain, VTA, very happy to provide additional support," said Joint Powers and VTA boardmember Ken Yeager. "We're all sort of looking forward to this. But without any question, when the whole thing is over, it will have cost us a great deal of money."

Cap on @VTA ridership will mean some #SB50 ticket holders will need alt ways 2 get 2 game. At 5:02 @abc7newsBayArea pic.twitter.com/oOMF2x1tOt

Super Bowl ticket holders will get to Levi's Stadium using Caltrain, then transferring to VTA light rail at the Mountain View station. Ridership on game day will be capped at 12,000.

And contingency plans are in place for mishaps, such as a crossing accident with a car or with a pedestrian.

"We've made sure that our partners, such as Samtrans, are going to again, at their cost, have extensive buses, drivers and field supervisors up and ready being paid, ready to roll, the minute that were to happen so that we could create bus bridges across incidents," said Harvey.