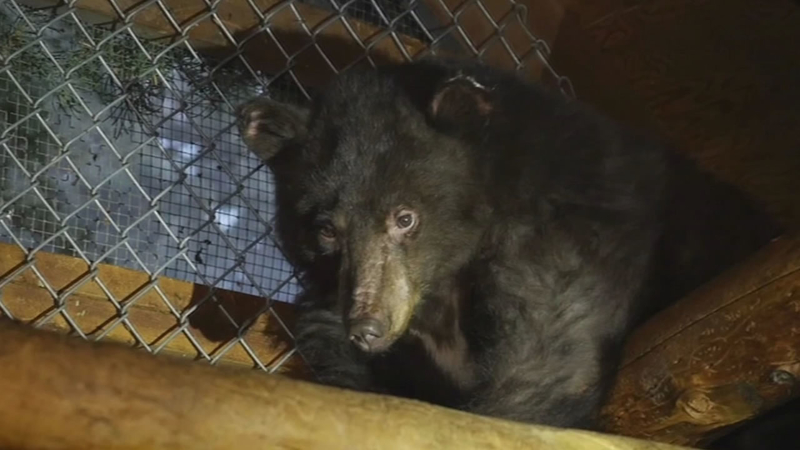 Badly burned bear one step closer to being back in wild

SOUTH LAKE TAHOE, Calif. (KGO) -- A badly injured bear cub that was flown to Lake Tahoe for treatment is a big step closer to being back in the wild. We first told you about the cub's dramatic rescue in Aug., and now we have a very good news update.

The cub, named Cinder, arrived Sunday night at her new temporary home in Idaho. After eight hours on the road, she's ready to explore.

Cinder was discovered last summer in the ashes of the biggest wildfire in Washington state's history. The 1-year-old cub's paws were so badly burned that she was found dragging herself on her elbows.

A volunteer flew her to Lake Tahoe Wildlife Care, one of the only places in the country with experience treating bears with burned feet.

Cinder had second and third degree burns. But the Tahoe team knew what to do.

For weeks, they changed the bandages on Cinder's feet every two or three days.

It was a long ordeal that involved jabbing her with a sedative. Cinder never got used to that part, but the painstaking care did the trick.

Her paws have healed dramatically, and the vet determined Cinder is ready to move to a bear facility in Idaho.

That skinny little bear who arrived there in Aug. at just 39 pounds now weighs 97 pounds.

Volunteers loaded her into a cage for the ride north, and she even got goodies for the road.

"First thing she wants to do when she wakes up is eat her grapes," Millham said.

Cinder will spend the rest of the winter at Idaho Black Bear Rehab, run by Sally Maughan, who is thrilled by Cinder's recovery.

"To bring her back to this stage is amazing," she said. "What she doesn't know is now she gets to go free pretty soon."

If all goes as planned, Cinder will be released this spring in the wild in Washington. All this rescue work is done with private donations.