KABC
By Marc Cota-Robles
LOS ANGELES -- A teacher seen punching a student during a fight at Maywood Academy High School is gaining support as a GoFundMe set up for him is raking up thousands of dollars.

The Friday afternoon fight, which was captured on video, involved 64-year-old music teacher Marston Riley and a 14-year-old student. The student was transported to an area hospital, where he was treated for minor injuries and released.

Marston was arrested but posted bond over the weekend. He is getting support - a GoFundMe account set up for him has raised more than $44,000 as of Monday afternoon.

Some students in the class say the argument that led to the fist fight was over the school dress code, and it escalated to the student allegedly using racial slurs.

Parents who spoke to Eyewitness News about the incident appear to be divided. Some believe Marston was just defending himself, while others say Marston is known for being aggressive.

Marston is due in court Nov. 30 as the fight remains under investigation by the Los Angeles County Sheriff's Department.

Meantime, crisis counselors were made available on campus for any students who need to discuss what occurred. Also, extra campus security will be on hand throughout the week.
Report a correction or typo
Related topics:
los angeleslausdfightteacher arrestedstudent safetyteachersstudentscaught on camera
Copyright © 2021 KABC-TV. All Rights Reserved.
RELATED 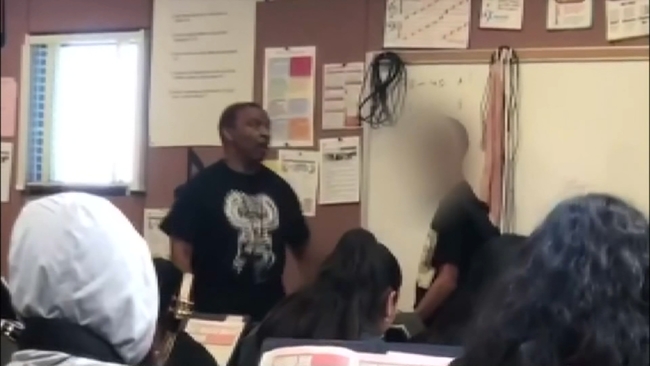