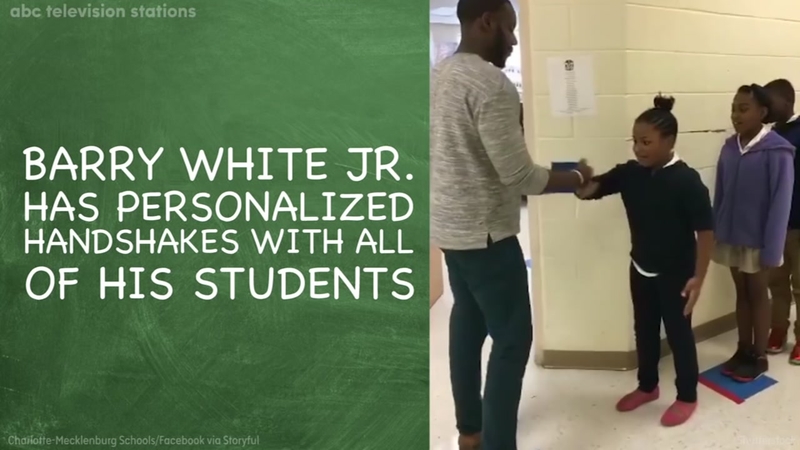 Teacher has awesome personalized handshakes with each of his students

May 7 kicks off Teacher Appreciation Week, meant to recognize teachers for how tirelessly they work every day.

In honor of the holiday, here are stories of teachers who really went the extra mile. And if any of these remind you of your teacher, they might deserve something a little more special than an apple this week.

For some, this was their first wedding, and the students ran up to hug their teacher after the ceremony. Keller teaches a combination of kindergarten and first grade students, so some of the students will have her as a teacher again this school year.

Teacher and student battle it out in epic dance-off

Students at Hyde Leadership Charter School in the Bronx watched in delight as 13-year-old Amir Wilson battled it out on the stage with his dance teacher, Mr. Cohen.

The gifted two hit the stage and danced the Harlem Shake to "Love Come Down" by Kid the Wiz and DJ SnS.

We all know that teacher who manages to be both super at their job and a super parent. But this teacher is really, really dedicated. Mom of four Jennifer Pope was working on lesson plans for a substitute while she was in labor!

The friend who captured the moment wrote of teachers, "Spoil them rotten because even in labor, they care. No lie, she gave birth less than an hour later."

The teachers who really make a difference are the ones that make you feel special. Barry White Jr. does just that with his students, mastering intricate, one-of-a-kind handshakes that he uses to get them pumped up for the day.

When Dena Carreyn's 4-year-old daughter Lyla became gravely ill, little did she know that it would be her preschool teacher who helped her survive. Lyla needed a kidney, and it just so happened that her teacher, Beth Battista, was a perfect match, so Battista volunteered to be the donor.

When Dena Carreyn came in to her daughter's preschool for a meeting with her teachers, she got an incredible surprise.

After learning the news, Lyla's mom wrote, "Many people think teachers are heroes. Beth Battista is more than our hero; she is our miracle."

Sometimes it's lessons beyond the curriculum that students most remember. Rosie Dutton taught her students a memorable life lesson about the effects of bullying.

To do it, she used two apples. Unbeknownst to the students, she dropped one apple on the ground prior to class, but they looked the same on the outside. She had the students pass both apples around the classroom, saying mean words to the tarnished apple and kind words to the other.

When they cut the apples open, revealing the bruises underneath, Dutton explained that you can't always see the effects of cruel words, but they're still there.

Some teachers are masters of starting each day off with a smile. Andrew Ward is one such teacher. He enters his Spanish class with an enthusiastic "Buenos dias!" that sets his students giggling. They loved the ritual so much they put together a compilation at the end of the year of all the times they had secretly recorded it.

This teacher's science experiments are on fire -- literally. Parent Steven Takata recorded the moment his son volunteered to be a part of an experiment involving methane. The student's hand was set on fire in a dazzling display (yes, he was OK!)

This college professor decided Justin Bieber was a great way to get through to the younger generation. Clint Tuttle loves to rewrite pop songs as a treat for his students. His spoof on Bieber's "Love Yourself" went viral on the University of Texas at Austin's Facebook page. The students can be heard giggling as the professor sings lyrics like "If you want to get the skills you need, you should go and learn Excel."