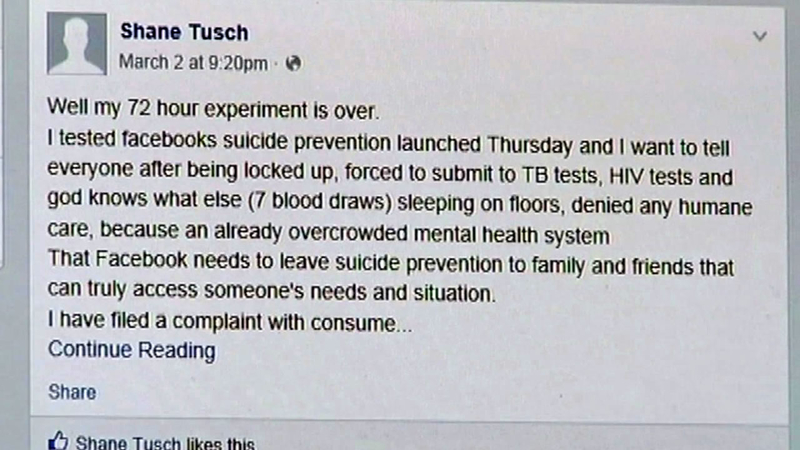 SAN MATEO, Calif. -- A San Mateo man is lodging a complaint against Facebook's new suicide prevention program because he claims it landed him in police custody.

A couple weeks back it was widely reported that Facebook had launched a new suicide prevention effort, but those reports weren't exactly right. Facebook has been working to prevent these tragedies since 2011, but recently it did up its game.

A Facebook video explained, "If you are using Facebook and you see a post from one of your friends that makes you concerned about them, the process is fairly straight forward."

Users can click an arrow in the corner of the screen and contact the poster, other friends or a suicide prevention hotline.

The video goes on to explain, "And the fourth option? Ask Facebook to take a look at the post. Your name will be kept confidential."

San Mateo resident Shane Tusch considers himself a citizen activist. Media reports of the Facebook project, he says,
prompted him to test the system. He had long been in a legal battle with his mortgage bank, so he says he vented those frustrations on Facebook.

He posted: "I have decided to take my life in some very public way... hanging myself from the Golden Gate Bridge."

"I was just making a statement, you know, it was more against the banks to bring awareness about what is going on," Tusch said.

One user checked to see if Shane was OK and another contacted the San Mateo police. Tusch wasn't home, but he heard of their visit and went to the police station.

"I actually said, 'I'm expressing my First Amendment right and I was not in danger to myself or anybody else,'" Tusch recalled.

Police say they made an assessment independent of Facebook and took Tusch into custody where he spent 72 hours under a mental health watch. Even his wife, Elizabeth Schumann-Tusch, could not get him sprung.

When we asked if her husband was suicidal, Schumann-Tusch told 7 On Your Side," No, No he is not.

We asked if she had any concerns at all and she replied, "No, no. He is a stay-at-home Dad, he takes care of our kids, if I had any doubt whatsoever he wouldn't be watching the kids."

Tusch says this shows that the Facebook program is over reaching and he has an ally in Consumer Watchdog.

Jamie Court heads up Consumer Watchdog and wrote to Facebook's Mark Zuckerberg, saying the Consumer Group is concerned with "The lack of safeguards in place to guarantee that errors in the system don't cause reputational, bodily or other harm to consumers."

"Once you put a label on people in a social network, or outside a social network, and you start to treat them as though they are suicidal -- whether they are or not -- that is the practice of psychiatry and you put the burden on the social work infrastructure in society to deal with what might just be an errant missive on Facebook," Jamie Court from Consumerwatchdog.org said.

Facebook worked with mental health professionals when designing the program and says it has an obligation to help those in this serious need. Consumer Watchdog says let this be a warning to everyone.

"You basically can be in prison by what you put on your Facebook page if you say the wrong thing and someone flags you for being suicidal,"

So remember, even though you are posting in cyber space, real life consequences can occur.
Related topics:
technologysan mateopalo altooaklanddublinsan francisco911 callsuicidefacebooksocial media7 on your side
More Videos
From CNN Newsource affiliates
TOP STORIES