KGO
By Michael Finney
SAN FRANCISCO (KGO) -- A new generation of GPS came out Tuesday after more than three years of testing.

This device has a certain wow factor to it, but will consumers be willing to pay for a service other companies give for free.

The latest navigational device draws its inspiration from fighter jets.

It also brings back memories of early Star Wars-like technology.

It's called Navdy and it puts the directions and map right before your eyes. "It's really changed the way I do business and organized my day," San Francisco Lisa Fung said. "I have the full screen of my dash board, but if I keep my head straight and slightly glanced further down, I can see the streets."

Navdy CEO Doug Simpson says the goal is to keep the driver's eyes on the road and not on their phone or console. "It's doesn't make a lot of sense to look down while you're driving," he said.

Watch the video player above to learn more about Navdy.

Below are commonly asked questions about Navdy

Does Navdy work on all cars?

According to Navdy, it works on 93 percent of all cars. The company says some cars with limited dashboard space won't work with Navdy.

Does it make a difference if you have a newer car or older car?

We tested Navdy on a 2011 Ford Fiesta. We were able to plug our smart phone into aux in so we could hear Navdy's audio out of the car's stereo speakers.

For cars that don't have that capability, you'll have to be content to hear the audio out of your phone's speaker.

If you don't have built in blue tooth, you'll have to choose between listening to music or listen to Navdy's audio out of your car's speakers. You won't be able to do both simultaneously.

How is the map's image projected so that the driver can see it?

Navdy is very protective of this information. Here's what they told us. "All information is projected in vivid color on our transparent display, giving you a clear view of maps, incoming calls, the road ahead, regardless of time of day or weather conditions. Navdy's light path is composed of transparent LED light and is purposefully projected in front of you with a display that exceeds 30,000 nits at the combiner. There is no image quality deterioration when viewed through sunglasses."

Is Navdy hard to install?

We're told by Navdy it should take the average person 20 minutes to install. If you prefer, Navdy offers free delivery and installation to customers in the San Francisco Bay Area. Navdy can be purchased for $799 on Navdy.com

Why was the production of Navdy delayed

Navdy was originally scheduled to be released last year. "We thought we could leverage more off the shelf technology but we learned that we had to build almost everything ourselves in order to meet the complexities and environmental conditions of a car like lighting and temperature," said Navdy spokeswoman Jenny Russo.

Navdy says it also acted on the feedback of its thousands of beta testers to improve the product and the user experience.
The dial on the steering wheel used to zoom in and out of maps and to call up text and email messages was added after the pre-order campaign to make navigating menus a lot easier.

Does the California Highway Patrol think Navdy is safe?

We contacted the CHP with that question, and here's what they told us. "We wouldn't be able to offer an opinion, but our interest is always going to be about safety behind the wheel and ensuring that drivers are focused on driving responsibly and within the law."
Related topics:
technologysan franciscocaru.s. & world7 on your sidegpsdriving
Copyright © 2020 KGO-TV. All Rights Reserved.
RELATED 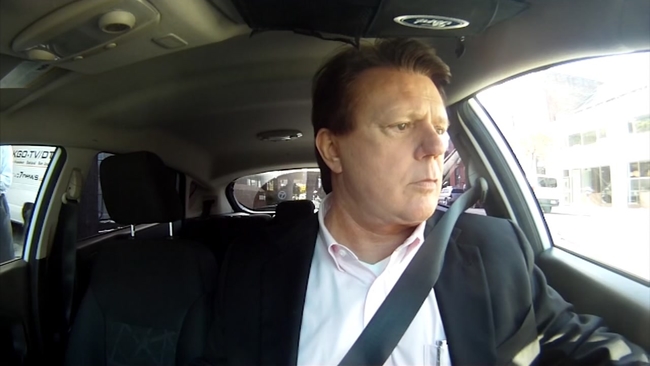