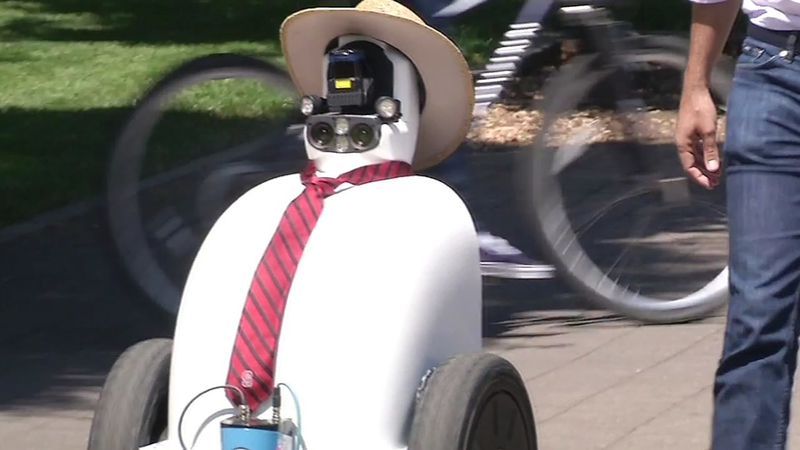 PALO ALTO, Calif. (KGO) -- It may not be long before robots are everywhere. And if that's true, a team at Stanford thinks it's time they learned some manners, so robots are being taught to be polite in a crowd of people.

He was named after Stanford's jackrabbits. Jackrabbot or J.R. for short has been learning the unwritten rules of social etiquette. Things such as respecting personal space, yielding the right of way to others and avoiding crossing groups of people who are interacting with each other are just some of the things the robot is learning.

But most robots don't move like humans. We've seen them in hotels and hardware stores traveling in straight lines, and stopping to avoid a crash. "They will freeze when it's too crowded and they will wait for people to go away to move again and we think that they can be smarter than that," Stanford University postdoctoral researcher Alexandre Alahi said.

So, the researchers gave J.R. some homework such as, analyzing video of hundreds of thousands of real human interactions. "We want to try to teach the robot OK, if this scenario is happening, you have to act like this," Alahi said.

The one thing is that the robot hasn't learned how to greet people.

For now, creators of J.R. are guiding him around with a familiar looking controller, gathering data on how human behavior changes when something rolls onto the scene.

"Everyone wanted to take a photo, or take a selfie, or people wanted to hug the robot, touch the robot," Stanford Ph.D. student Amir Sadeghian said.

J.R.'s computer vision could learn what a hug looks like, or when to stop and pose for a picture.