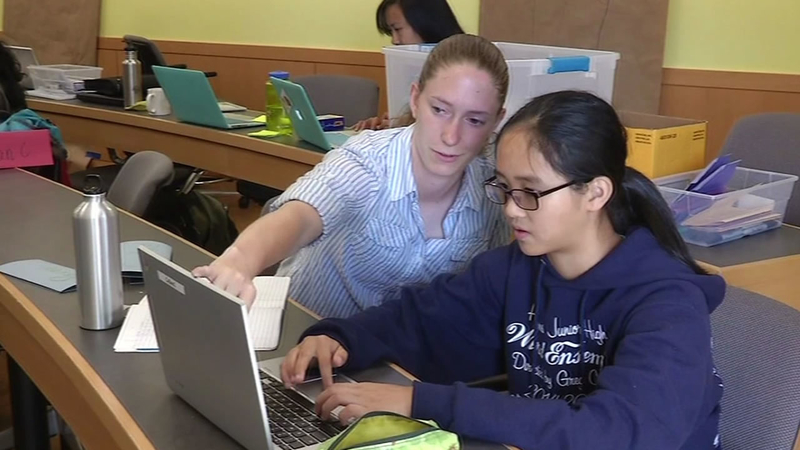 BERKELEY, Calif. (KGO) -- It is summer camp season and at UC Berkeley it is the government's cyberspies -- the National Security Agency -- who are sponsoring the summer fun. Instead of cloak and dagger, it's all about codes and hackers.

Taking apart a computer is only the beginning of this four-week summer camp. By the time it's over, the teens will know how to code in Python, set up a network and defend it against an attack.

Not that kind of attack... we're talking about hackers.

When we asked high school senior Rachel Evans if she ever hacked anything, she replied, "No, I have not, but maybe during this camp I will."

Put on by UC Berkeley, the camp is paid for by people who know a few things about hacking. It's funded by the NSA.

Many of the students don't know who Edward Snowden, but they'll learn about him soon enough, since current events are part of the curriculum. From high profile security breaches like the Target store credit card breach, to the controversy over the very agency that is funding dozens of camps like this one around the country.

"We're not telling them it's good, it's bad. They're going to know the basics of it and make that call for themselves," Anna Cardenas, a "Cybear" co-teacher, said.

But it's no state secret why the NSA wants the kids here. They told ABC7 News it is because the government desperately needs more smart people to go into the field of cybersecurity, and so do companies here in the Bay Area.

They are jobs these teens might one day be qualified to take.

"I would love to work for a Silicon Valley company down there, or if the NSA wants to offer me a job, I would definitely take it," high school junior Nick Hardwick said.

We know the NSA has one opening, with Snowden no longer working for them.

When asked if she would like to take his job, Evans said, "Well, I'm not sure what his specific job was, but I think I would like to work for the NSA one day."

Between now and then, there's a lot of hard work to do, but here it sure doesn't feel like it.

"Like some people go to the beach to have fun for summer, but to me, hacking things and coding is a beach summer to me," Hardwick said.
Related topics:
technologyberkeleyuc berkeleysecurity breachcyberattacknsasummer funhackingsummereducationinternetcomputersedward snowdenteenagersu.s. & worldsecurityjobs
Copyright © 2021 KGO-TV. All Rights Reserved.
More Videos
From CNN Newsource affiliates
TOP STORIES