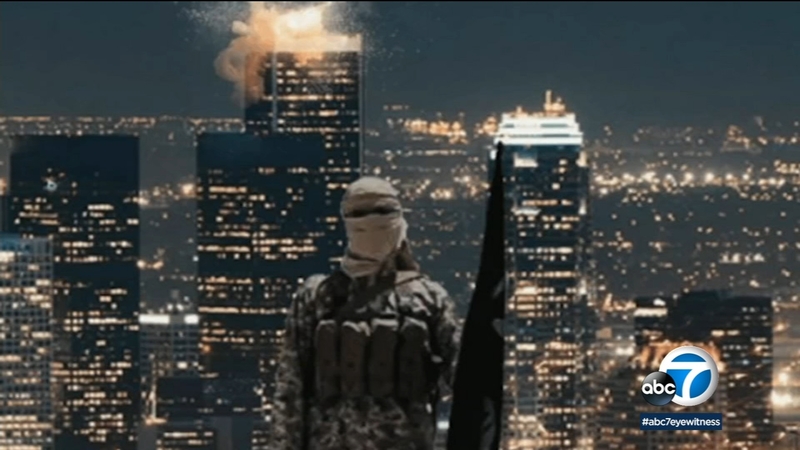 The photoshopped image shows an explosion at the top of the AON tower in downtown Los Angeles.

In the foreground there's a man in a uniform with his face hidden and holding an ISIS flag.

The building is on Wilshire Boulevard in the city's financial district. It is the third largest building in Los Angeles.

"You have to take this very seriously because the fact is that skyscrapers here in Los Angeles have been a target by terrorist organizations," said Steve Gomez, a terrorism and security expert.

These threats aren't new. But some are more credible and more frightening. In 2002 the government stopped a plot by Al Qaeda to fly a hijacked airplane into the tallest building in downtown Los Angeles, the U.S. Bank Tower.

"That was a serious plot, that was considered the follow up to 9/11 - the second wave," Gomez said. "And in that case law enforcement, the United States intelligence community, were able to successfully identify the plot and apprehend a number of the suspects."

At the AON building Friday, nothing appeared to be unusual and a number of the people who worked there said they weren't aware of the possible threat.

The Los Angeles Police Department said it was aware of the image, but had no information about any credible threats in Los Angeles.

"Nevertheless, we are taking this very seriously and are working with our federal partners to coordinate any information that will lead to the source of the post," the department said.

The Los Angeles Police Department is aware of the posting made on social media today however, at this point we have not been able to find any credible threat against buildings in our city.

Nevertheless, we are taking this very seriously and are working with our federal partners to coordinate any information that will lead to the source of the post.

As always we encourage every Angeleno to heighten their awareness and “if you see something, say something.” Report it to https://t.co/jGoT7rw87U or 1-877-ATHREAT