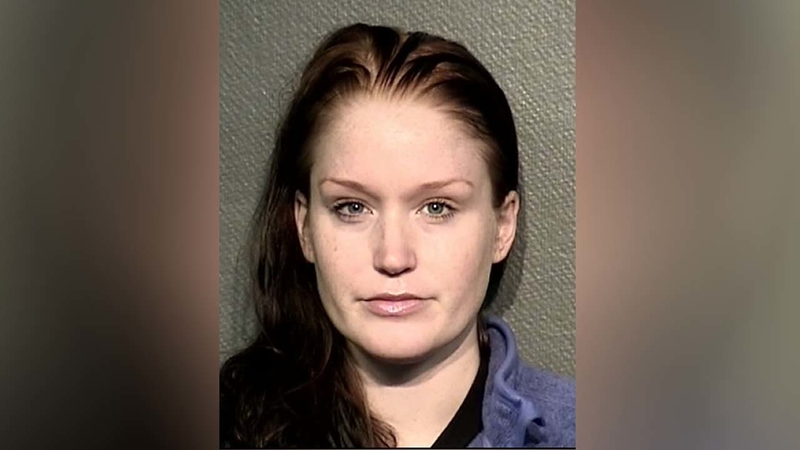 HOUSTON -- A Spring Branch ISD teacher has been arrested and placed on leave after she allegedly touched a 14-year-old female student inappropriately more than once and sent the girl sexually explicit messages.

Whitney Anne Laidlaw, 32, is charged with sexual assault of a child under 17 years of age and improper relationship with a student for two alleged incidents occurring on Aug. 1 and Aug. 14.

The victim identified Laidlaw as her hip-hop teacher at Cornerstone Academy Middle School.

According to court documents, the student told investigators that she exchanged numbers with Laidlaw and that they communicated by phone, on Instagram and Snapchat.

RELATED: Texas middle school employee accused of 'falling in love' with teen cannot have contact with anyone younger than 17

The teen said that Laidlaw texted her at the end of her 7th grade year, telling the girl that she had feelings for her.

The student also told authorities that Laidlaw would ask her to sneak out of her apartment in Harris County to meet her during the summer.

She says she told Laidlaw she didn't want to sneak out but the teacher showed up anyway at her apartment several times in the morning after the girl's mother left for work and asked her to meet her in her vehicle.

The student said that Laidlaw kissed her and touched her inappropriately in the back seat and that it happened more than one time.

The girl also stated that Laidlaw sent her pictures of herself with her shirt up wearing no bra and that Laidlaw would ask the student to do the same thing, but the victim refused. She also refused to send Laidlaw an inappropriate video of herself after being asked by the woman to do so.

According to court records, the girl's father discovered messages on her cell phone that were sexual in nature and when he asked her about it, she told him they were from Laidlaw. She also told him about the kiss and Laidlaw allegedly touching her.

When authorities went to the school to speak with Laidlaw, she refused to provide a statement, the record shows.

Officials spoke to the school's principal who admitted that she was already made aware of the situation by the teen's mother.

The principal confirmed that Laidlaw was a teacher at the school during the time the alleged assaults happened.

Spring Branch ISD released the following statement to ABC13 in response to the allegations:

"The Houston Police Department (HPD) has notified Spring Branch ISD Police that HPD has arrested a Cornerstone Academy teacher, Whitney (Grunder) Laidlaw, for alleged crimes involving an improper relationship with a student. When the allegations came to the district's attention last week, we immediately removed Mrs. Laidlaw from the classroom and placed her on administrative leave. The alleged incidents reportedly occurred during the summer break and did not occur on school property.

We are outraged by this alleged conduct. The safety of every SBISD student is our very highest priority, and having a strong moral compass is a key district core value. We will never tolerate inappropriate actions on the part of any district employee who endangers or harms our students. These allegations, if true, are a complete breach of the trust our children, our community, and we place in our educators.

We will continue to work closely with law enforcement regarding this matter. We will have counseling resources available for student support.


Should you have any additional information about this matter, please contact the Houston Police Department at 832.394.5500. You may also contact the Spring Branch ISD Police at 713.984.9805."

Laidlaw's bond conditions include that she not have any contact with the victim or anyone in her family, physically, electronically or by mail.

She also cannot go within 200 feet of any child care facility, school or home where the student lives or attends.

Laidlaw must temporarily surrender passports or visas to the Harris County District Clerk. She cannot have contact with anyone under the age of 17.

She must stay at least 1,000 feet away from areas where children are commonly gathered, including schools and day care centers. She also can't supervise or participate in any program with children under the age of 17.

She cannot have access to a computer or cell phone with internet or possess pornography.