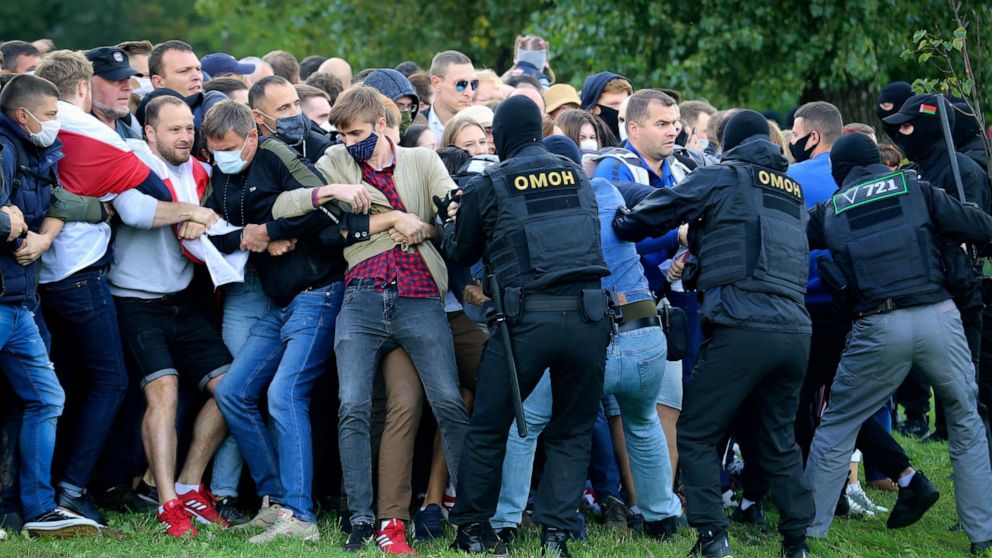 WARSAW -- Two armed police officers stand watch at the entrance to a small office in Warsaw, the capital of Poland. In the courtyard, a van holds several more officers.

The security is warranted. Inside the office is arguably one of the most important leaders of the weeks of protests in Belarus that have sought to push its authoritarian leader, Alexander Lukashenko, from power. Stepan Svetlov is 22 years old and -- despite not having been in Belarus for two years -- has played an outsize role in them.

Svetlov runs NEXTA, a social media channel on the messenger app Telegram that has become a crucial organizing tool in the protests that have shaken Lukashenko's 26-year rule.

On the night of Aug. 9, when Belarus' presidential election concluded, giving Lukashenko 80% of the vote, thousands gathered in the center of Minsk to protest. As they had repeatedly over the past few weeks, authorities shut down the internet, creating a near total information blackout inside Belarus as riot police attacked peaceful demonstrators with rubber bullets and stun grenades.

The internet shutdown incapacitated most social media and messaging services. But NEXTA, based in Poland, is equipped with some anti-censorship safeguards and was able to keep posting. It gathered videos of the crowds and then the savage assaults by police.

In the days after, with virtually all other online news sites blocked and state media showing nothing of the protests, NEXTA became the go-to source for information on the demonstrations. It posted calls for where protesters should gather and, when police sealed off an area, proposed alternative plans. People sent hundreds of videos to the channel, which would then publish them, cheering on the protesters and also broadcasting images of police brutality that fed popular fury.

At times, NEXTA has almost been able to guide the protests in real-time, warning people where police are and directing groups of protesters toward each other. It would list advice on buying protective equipment, the location of nearby pharmacies for those hurt and recommend how protesters should move, for example telling them to march in many groups from different directions so as to overstretch police.

"We do feel that to a certain extent we are the organizers and coordinators of these protests because who else could do it?" Svetlov told ABC News in a recent interview at the Warsaw office. "But we understand it's the people themselves who took to the streets. We just help in the first stages, so they can gather, so they know at what time. We just assist people but they are the ones who actually go out and protest."

Since the protests began, NEXTA (pronounced "Nekh-ta" and translating roughly as "Everyman" in Belarusian), along with several other Telegram channels, has gained hundreds of thousands of subscribers, reaching well over 2 million. At the height of the protests, Svetlov said he was being sent several thousand videos each day.

The channels have allowed people to circumvent the heavy control on Belarus' media. Even compared to neighboring Russia, Belarus' state broadcasters are remarkably unchanged since the Soviet times, airing often crudely edited pieces that give entirely fabricated reports. Traditional print and television media are dominated by the state. Independent bloggers publishing material critical of the authorities risk arrest.

"We are currently witnessing what may be the world's fastest digital transformation as Belarusians respond to Kremlin-style fake news and government censorship by adopting new ways of delivering and consuming independent information," Franak Viaorka, a non-resident fellow at The Atlantic Council, wrote in a recent article.

"In what remains a largely leaderless political protest movement, these digital platforms have performed an invaluable service," Viaorka wrote.

NEXTA's operation in Warsaw is tiny, run by Svetlov and a handful of other Belarusian exiles with a couple of laptops. Svetlov has not visited Belarus since 2018, when authorities raided his home. Since then he has been based in Poland, where he was a student and which, thanks to frequent trips as a child, he said he sees as a "second home." Poland's government has been a strong advocate for the protesters in Belarus, pressing the European Union from early on to support the demonstrations.

"If someone in Belarus tried to do this they'd get detained, no question. That's why we feel the responsibility and we feel the Belarusian people need us, so we have to do it for them," Svetlov said.

Svetlov began developing what would become NEXTA in 2015 while studying television and film production at Poland's Katowice University. The original plan was to make it a music channel on YouTube but it didn't see much success until Svetlov added a news section and began publishing events in Belarus. After the channel gained over 100,000 subscribers, the authorities started paying attention, he said.

"They tried to block the channel on copyright grounds. Of course, that was just an excuse. I just used bits of video of Lukashenko recorded off state TV," Svetlov said.

In Europe and the United States, Telegram is best known as an encrypted messenger. But in Russia and former Soviet countries, it has become a major news source. Users can subscribe to post headlines, short text stories, photos and videos in the so-called "channels."

Created by the Russian internet entrepreneur Pavel Durov, Telegram was designed from the beginning to be resistant to authoritarian censorship and Russia recently gave up a fruitless two-year effort to block it. During the protests in Belarus, Durov tweeted he had activated "anti-censorship tools" to protect the app.

Svetlov said NEXTA supports itself primarily from donations from subscribers; in August, it received $40,000, he said, some of which would be sent as aid to people in Belarus.

NEXTA's success makes it an obvious target for Lukashenko's government. Svetlov said the team is under the protection of the Polish government.

"Of course, we get a lot of threats, but for now it's OK," Svetlov said. "We now try to avoid going out without real necessity. These days it's just to the office and back."

He went on, "We haven't yet faced any direct risks, no verbal assaults, but we did have strange characters near the office. Our editor and his girlfriend saw someone secretly taking pictures of them in a restaurant. Weird things happen, but so far, we haven't faced danger directly."

Lukashenko's regime has moved in the past two weeks to break up the leadership of the protest movement. Lukashenko's main opponent in the election, Svetlana Tikhanovskaya, was forced into exile days after the vote. Authorities recently detained Maria Kolesnikova, the last of the three women who headed the protest movement in Belarus. All but two members of the opposition's transitional negotiating body are now either detained or in exile abroad.

Authorities have increased the pressure on the protests and Lukashenko's grip has appeared stronger recently, bolstered by Russia which has signaled it will not allow him to fall.

Svetlov, however, said he believes the protests in Belarus will continue, both as demonstrations and in other forms, like economic boycotts. He also has a plan to expand NEXTA now beyond Belarus and into other former Soviet states, including Russia. "Because we need to communicate what is happening there as well," he said.

In any case, he said he believes Lukashenko's grip on information in Belarus is already broken.

"We are warriors of information, you can call us that. These days everyone needs to do whatever they can. But we've already won the information battle," Svetlov said.
Report a correction or typo
Related topics:
abc newsnational
Copyright © 2020 ABC News Internet Ventures.
More Videos
From CNN Newsource affiliates
TOP STORIES