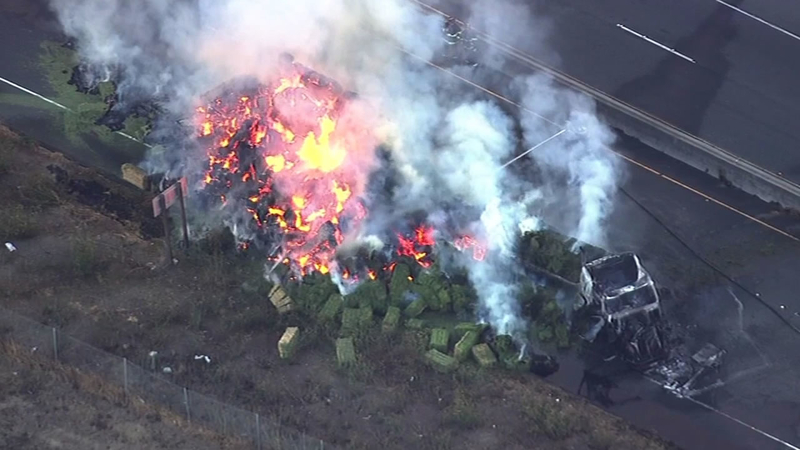 VALLEJO, Calif. (KGO) -- The California Highway Patrol issued a Sig-alert for state Highway 37 in Vallejo due to a big rig fire that temporarily blocked the roadway in both directions.

The westbound lanes are expected to reopen by 6:00 p.m. due to clean-up efforts.

Officers established one-way traffic control in the eastbound lanes of the highway. They're advising commuters to use state Highway 29 as an alternate route to and from Napa.

It all started as a five-car collision that included a big rig and four other cars. Lanes were shut down on Highway 37, forcing morning commuters to turn around.

CHP doesn't know yet what led to the crash or how the fire started, but they say the big rig carrying two trailers of hay fueled the flames to keep going for hours.

Dustin Miller captured video of the thick smoke from his backyard. "This morning, we heard some explosions outside of our backyard. So I went out and saw the vehicle on fire and there was some explosion," he said.

The driver of the big rig got out just in time. He and all the other drivers are safe.

It was a scary situation for a Caltrans worker as well after being rear ended near the scene.