Dwayne 'The Rock' Johnson gets star on Hollywood Walk of Fame 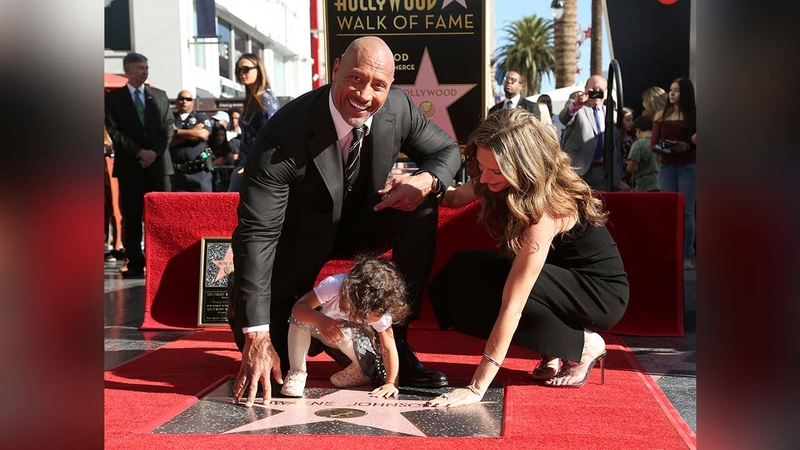 Dwayne 'The Rock' Johnson gets star on Walk of Fame

HOLLYWOOD, LOS ANGELES -- Dwayne "The Rock" Johnson received a star on the Hollywood Walk of Fame on Wednesday.

The wrestler-turned-actor spoke at the unveiling ceremony, emphasizing the importance of working hard and being grateful for what you have.

He thanked his friends, family and fans, for whom he said he was "grateful to the core of my bones."

"At the end of the day, all this goes away if it weren't for you," he said, addressing his screaming fans.

He also reflected on hard times he experienced in his past, saying when he was 15 years old, he and his family members were evicted from their resident in Honolulu and forced to leave the island.

Dwayne "The Rock" Johnson received a star on the Hollywood Walk of Fame on Wednesday.

Johnson said through it all, he's kept the following quote close to his heart: "It's nice to be important but it's more important to be nice."

The actor delivered this mantra after bringing his adorable daughter Jasmine to the podium.

The unveiling ceremony took place at the Hollywood & Highland complex just one week before the release of Johnson's latest film, "Jumanji: Welcome to the Jungle."

Johnson's recent films include "Baywatch," "The Fate of The Furious," "Central Intelligence" and "San Andreas."

Future films include "Jungle Cruise," based on the Disneyland ride, and a "Fast and Furious" spinoff based on his character. He also stars in the HBO comedy "Ballers."

Johnson was born May 2, 1972, in the east San Francisco Bay Area community of Hayward and raised in Hawaii and Pennsylvania.

Johnson played defensive tackle at the University of Miami. His football career ended with a stint on the practice roster of the Calgary Stampeders of the Canadian Football League in 1995.

Click here for more stories on Dwayne "The Rock" Johnson.