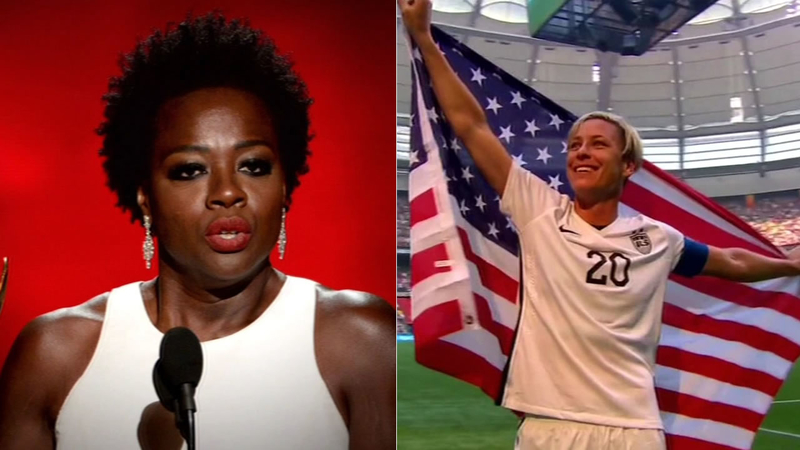 As we near the end of the year, it's time to take a look back. Tuesday night on ABC7, "Good Morning America's" Robin Roberts will be looking at all the big moments that defined 2015 and the people that inspired us the most.

Here's a sneak peek at her heroes of the year.

This year there were no shortages of heroes - or shall we say "she-roes."

From the soccer field to center stage, women inspired us all.

The U.S. Women's National Soccer team showed us all that teamwork and determination can lead to greatness.

"I think that was a nice example of what the society can be as a whole if we started maximizing the potential in each other and stop being divisive and keeping each other apart," ABC News contributor LZ Granderson said.

With her win, Viola Davis was the first African-American woman to take home the Emmy in the drama category for her lead role in "How to Get Away with Murder."

"When you're a kid sitting there watching TV, whether you're black or brown or of any color, and you see someone who looks just like you, then you believe all things are possible," "Entertainment Tonight's" Kevin Frazier said.

"The only thing that separates women of color from anything else is opportunity," Davis said in her acceptance speech.

Off the stage and field, there were so many heroes among us.

The families of the Charleston church shooting victims taught us heroism comes from the heart when there is room for forgiveness.

Speaking directly to the killer in court, they showed incredible strength in the wake of tremendous grief.

"We have no room for hate so we have to forgive," the sister of victim Rev. Depayne Middleton said.

"I will never talk to her ever again, but I forgive you," the daughter of victim Ethel Lance said.

"They taught us a lesson, didn't they? On how to move on and not let the killer claim even more lives. The lives of the living," "GMA" contributor Nancy Grace said.

In a year with so much darkness comes a beautiful lesson from all of these heroes on how to view the world.