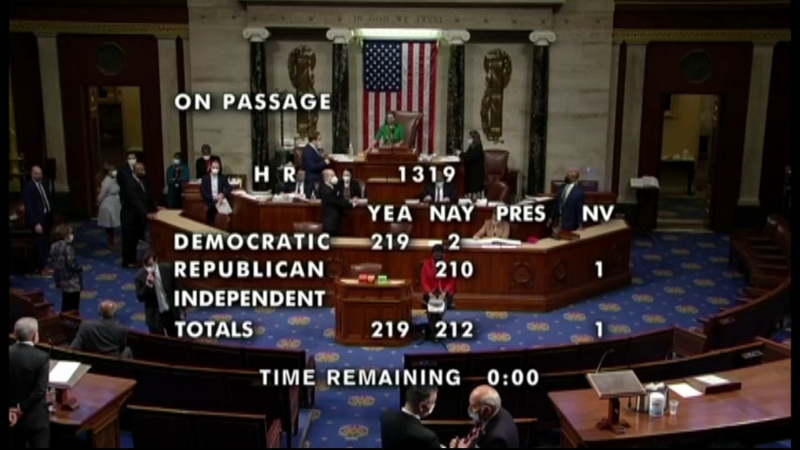 WASHINGTON -- The Senate could move as soon as this week to pass their own version of President Joe Biden's $1.9 trillion COVID relief bill.

That plan will, of course, look a little different than the House bill as it won't include the $15 an hour minimum wage. It also is not going to include the so-called Plan B drafted by Senate Finance Committee Chairman Ron Wyden that would have penalized corporations that didn't increase wages on their own. That plan faced pushback in the Democratic caucus.

It's a complicated provision. How do you select which companies qualify? How do you determine what the wage should be? Is it $15 or is it less to win support from people like Sen. Joe Manchin, the moderate Democrat from West Virginia? Those questions would have taken awhile to answer.

It became clear over the weekend, according to multiple aides, there wasn't time for it. The differences among members may have been able to be worked out, but abandoning it is a sign that Democrats are trying to move quickly here. They don't want this dragging out. They are close to the finish line and an intra-party fight over the minimum wage Part 2 isn't exactly helpful in the moment.

President Joe Biden encourages lawmakers to act "decisively, quickly and boldly" after the COVID-19 relief bill passed in the House.

If the Senate passes their version of the bill by the end of the week, that gives the House time to re-pass the new version in their own chamber. It also gives the President time to sign it and gives states an opportunity to readjust their unemployment benefits with the increased benefit.

Yes, Democrats are on schedule right now and many aides have told CNN "it's a strange feeling" after four years of tumult under former President Donald Trump. There are no doubts Biden is going to sign this proposal. There is no tweet coming for bigger stimulus checks. The White House and congressional Democrats are in lockstep here. They have been the whole time, and it's part of the reason this package looks so identical to Biden's plan. It's also why they may meet their deadline of having enacted the bill by March 14 when a weekly federal enhancement in benefits is scheduled to expire.

This plan is subject to change, but this is what we are looking at for timing:

MORE: Highlights of the COVID relief bill as it heads to the Senate
EMBED More News Videos

The COVID relief bill heads to the Senate: What's in it for you?

Something to remember about vote-a-rama

The last vote-a-rama was just show votes. It was an opportunity for Republicans to put Democrats on the spot on controversial issues and try to draw out Democratic defections. It worked on a few issues. Two Democrats crossed the aisle and voted for a Republican amendment to allow the continuation of the Keystone XL pipeline. A handful of Democrats joined Republicans to tighten income eligibility requirements on who was eligible for stimulus checks.

But in the end, Democrats passed an amendment to strip changes from the bill. Those amendments didn't have the force of law anyway because they were on a budget resolution. This time is different. As one GOP senator told CNN, these are "live bullets" and keeping Democrats unified in the vote-a-rama is going to be key for Democratic leadership. The work to do that is already underway, but it is going to be a tough test for Schumer.

On Tuesday, Biden will join Democrats in their lunch and that will be an opportunity for Biden to deliver a closing argument of unity.

Progressives will keep pushing on minimum wage, but it isn't likely to change anything

Expect in the next few days, House progressives and outside groups growing louder in their calls that Vice President Kamala Harris needs to ignore the ruling of the Senate parliamentarian and pass the minimum wage anyway. That isn't going to happen.

Practically speaking, the White House has already said it, repeatedly. The chief of staff has said it. The White House's own official statement was that they were disappointed in the ruling on minimum wage, but respected the decision. And, on a political level, Senate Democrats cannot lose Manchin and Democratic Sen. Kyrsten Sinema of Arizona, which is exactly what would happen if Harris ignored the parliamentarian.
Report a correction or typo
Related topics:
politicseconomymoneystimulus fundsgovernmentu.s. & worldcongress
STIMULUS FUNDS
Tax filing season starts Monday. What to expect for 2022
5 tax changes that can boost your refund this year
What to know about stimulus checks, federal aid in 2022
Tax season 2022: 3 changes to know about before filing your taxes
TOP STORIES
Bay Area's great migration is creating a 'Megaregion'
Sonoma resident says Airbnb visitors stole his cat
Couple devastated after stolen van found severely damaged in Oakland
EDD director resigns after just over 1 year in charge
Meet the man taking 49ers superfan to a whole new level
'We're taking the town over!': 49ers fans arrive in LA for NFC
49ers-Rams NFC Championship Game preview
Show More
How many times can I reuse my N95 mask?
Fraudulent rent relief claims divert funds from those in need
Anti-racist lawn libraries take hold in Bay Area neighborhoods
Some Bay Area counties begin easing COVID restrictions
10 injured in PA bridge collapse; human chain formed to help
More TOP STORIES News