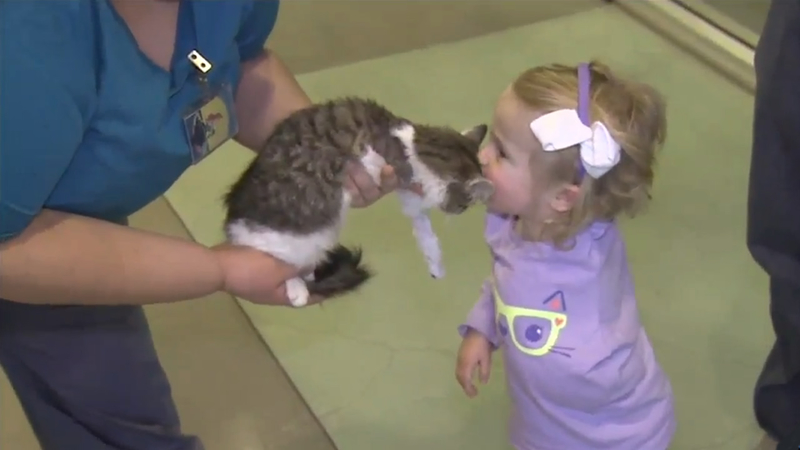 JURUPA VALLEY, Calif. -- A three-legged kitten who survived a horrific injury has been matched with the perfect family in Orange County.

The kitten, named Holly by the animal shelter, was adopted by Matt and Simone Tipton, who have two children, including 2-year-old Scarlette.

Scarlette was born with a rare form of cancer that ultimately led to her left arm being amputated in October 2014 when she was just 10 months old.

The surgery was a success, as the family has been told she is now cancer free.

As Scarlette continues to recover, the Tiptons have searched for the perfect family pet to aid in her journey.

"We really wanted to get her an animal that she could kind of relate to, something that she can grow-up with and feel like she has a special bond with," Simone Tipton said.

The family sought a pet who had amputation surgery too when they heard Holly's story.


Holly was found bleeding with her arm dangling by two women in Perris on Dec. 17.

The women, Edith Rios and her daughter-in-law Kelley Gonzalez, wrapped the 3-month-old kitten in towels and rushed it to the San Jacinto Valley Animal Campus.

Veterinarians were able to care for the kitten, but had to amputate her right front leg.

Without the quick actions of Rios and Gonzalez, the Riverside County Department of Animal Services said Holly would have likely died.

The department of animal services said it's not sure how the kitten was injured, but believe she was either caught in the fan belt of a car engine while seeking warmth or hit by a car near the intersection of Wilson Avenue and Huckleberry Drive.

On Christmas Eve, the Tiptons visited the kitten, who was still recovering from the amputee surgery.

Veterinarians said the kitten has made great strides since her surgery, and on Wednesday, the Tipton family officially adopted her.

While the shelter named the kitten Holly, the Tipton family said they will rename the kitten "Doc" after Scarlette's favorite cartoon character "Doc McStuffins."

"Doc McStuffins, her favorite little cartoon on TV, and also because both the cat and her have had so much interaction with doctors," Matt Tipton said.