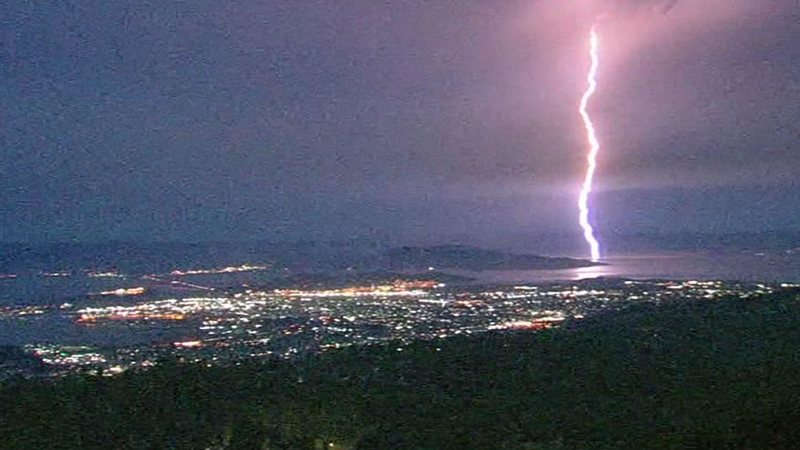 The best thunderstorm chances in the Bay Area for Sunday start around 4 p.m. to 5 p.m., going until midnight, a National Weather Service spokesperson said during a press conference on Sunday morning.

"It's possible you could see some thunderstorms after midnight as well, but mainly during this evening period."

LIST: Here are all the fires burning in the Bay Area

The spokesperson said there's a 50% chance that the fire area in San Mateo and Santa Cruz counties could see a direct lightning hit from thunderstorms. "If we do get a direct hit from any thunderstorms, expect to see little to no rainfall, maybe a few drops, maybe a few sprinkles, but not very much to affect your fire. If anything, you're going to see some abundant lightning, gusty outflow winds up to 50 or 60 mph, if we get that direct hit on this fire area."

Check out the compilation video above to see some of the most staggering lightning scenes captured by our ABC7 cameras and our viewers around the Bay Area.

The atmosphere will be primed Sunday afternoon and evening for high-based lightning and gusty winds, according to ABC7 News Meteorologist Lisa Argen. Moisture will be limited but winds and new fires starting in the North Bay remain a possibility.

A Red Flag Warning remains in effect through 5 p.m. Monday for the entire Bay Area.

Argen says the latest model guidance has offshore storms trending north into the North Bay Monday morning. Thunderstorm winds and lightning are unpredictable until detected on radar, she adds.

More than 12,000 lightning strikes this past week sparked 560 wildfires in California, burning an area larger than the state of Rhode Island, CAL FIRE officials said Friday. 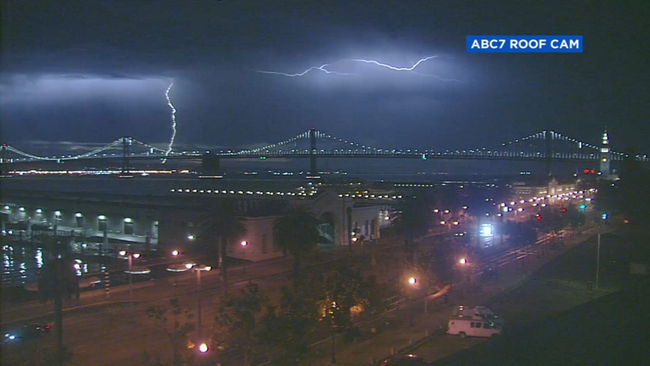 EXCLUSIVE: How fire risk scores can lead to canceled insurance
Boulder Creek camp struggling to rebuild gets hit by thieves