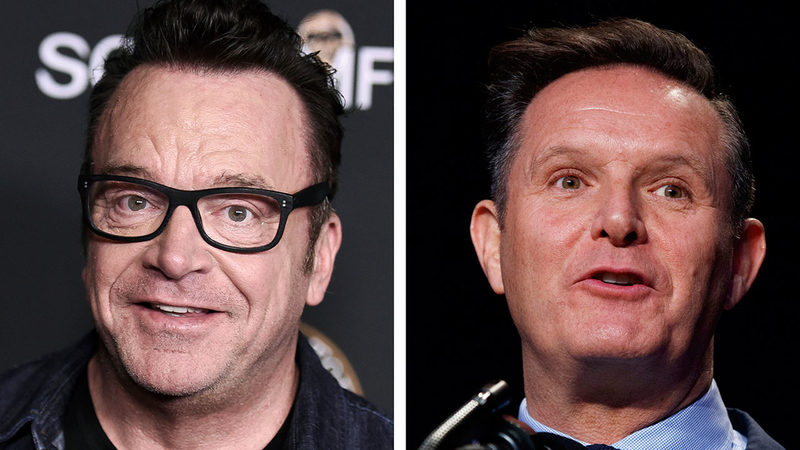 In social media posts, Arnold accused Burnett of choking him at "this huge Emmy party then he ran away with his torn Pink shirt & missing gold chain," Arnold tweeted. "I'm waiting for LAPD."

Mark Burnett just went apeshit & choked me at this huge Emmy party then he ran away with his torn Pink shirt & missing gold chain. I’m waiting for LAPD

According to the Los Angeles Police Department, there is no record of officers responding to the party and no reports of an incident involving Arnold or Burnett.

Burnett's wife, actress Roma Downey, tweeted a photo showing a bruise on a hand. She said she got the bruise when Arnold "tried to ambush" the couple. She ended the tweet with "Is your TV show worth it Tom? Please stop."

Arnold replied: "You lie your crazy husband attacked me you psyco. I'm filing police report & suing you for defamation."

Bullshit. You lie your crazy husband attacked me you psycho. I’m filing police report & suing you for defamation. https://t.co/9yXAEXM6na

Downey was referring to Arnold's new show, "The Hunt For The Trump Tapes," which premieres Tuesday on Viceland. The show follows Arnold's attempts to find tapes that show Donald Trump expressing bigoted views on the set of "The Apprentice," which Burnett produces.

A promo on twitter teases: "Here's Who Tom Arnold Is Bothering," and Burnett is included on that list.

Actress Alyson Hannigan tweeted that she witnessed the confrontation and thought it was a joke until security jumped in.

The reported altercation happened at a fundraiser for the Motion Picture Television Fund at the Lawn at Century Park.