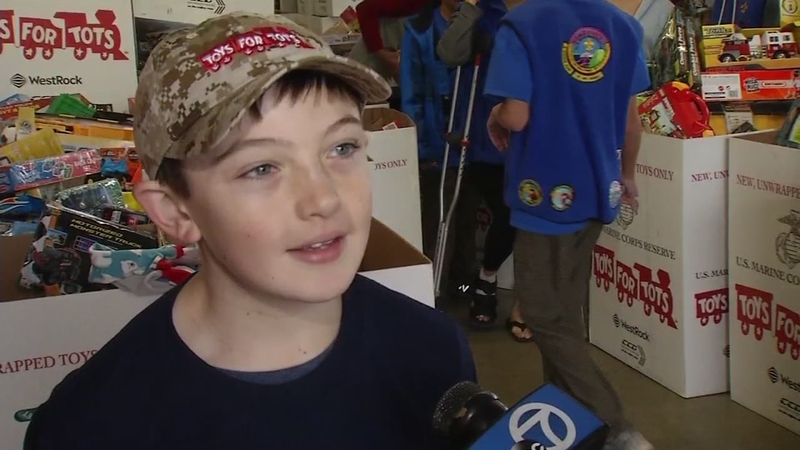 SAN JOSE (KGO) -- If you are looking for some hope today, we have someone we think you should meet. At a time of year when a lot of kids are so focused on what they can get, this is a story of a boy focused on what he can give.

Almost 100,000 toys are heading out to charities in Santa Clara County from the Marine Corps Toys for Tots program. It takes a lot of work to do this and one San Jose boy is doing more than his part.

You can tell Joey Childs isn't like most 11-year-olds. Just watch him handle a fork lift at his parent's business, Silicon Valley Moving and Storage in San Jose. But if you really want to be impressed, check out what he's done for the Marine's Toys for Tots program.

"Oh, we're proud of him. He's a hard worker. He's been a hard worker since he was two," said Cheri Childs, mother.

Joey has been doing his toy drive since he was six-years-old. How does he do it? The 5th grader starts in September by making his flyer.

"I print out a lot of them and I go street by street door to door and I talk to people and tell them what it's about. And that's how I do it," said Joey.

Donations roll in, and he delivers every year for the past five years. It's something that's caught the attention of the brass at the Marine Corps Reserve Center in San Jose.

"I think he has some good discipline. I think he has a good base there for that. I think he'll be an outstanding Marine if he chooses to take that path," said Staff Sergeant Timothy Stevens, U.S. Marine Corps Reserves.

"And he knows how to salute now apparently?" asked Keller.

Joey is still collecting toys, he has his special email address joey@siliconvalleymoving.com for people looking to donate.

Click here for more stories and videos about this holiday season.

About 100,000 toys were collected for "Toys For Tots" at the Marine Corps Reserve Center in San Jose. They will be distributed to charities. pic.twitter.com/AF9u2QDtPc