KGO
By Amy Hollyfield
SAN LEANDRO, Calif. (KGO) -- Lanes of Interstate Highway 880 in San Leandro have reopened following a crash this morning involving a big-rig truck and several other vehicles, according to the California Highway Patrol.

PHOTOS: Horrific crash closes lanes for hours on I-880 near San Leandro 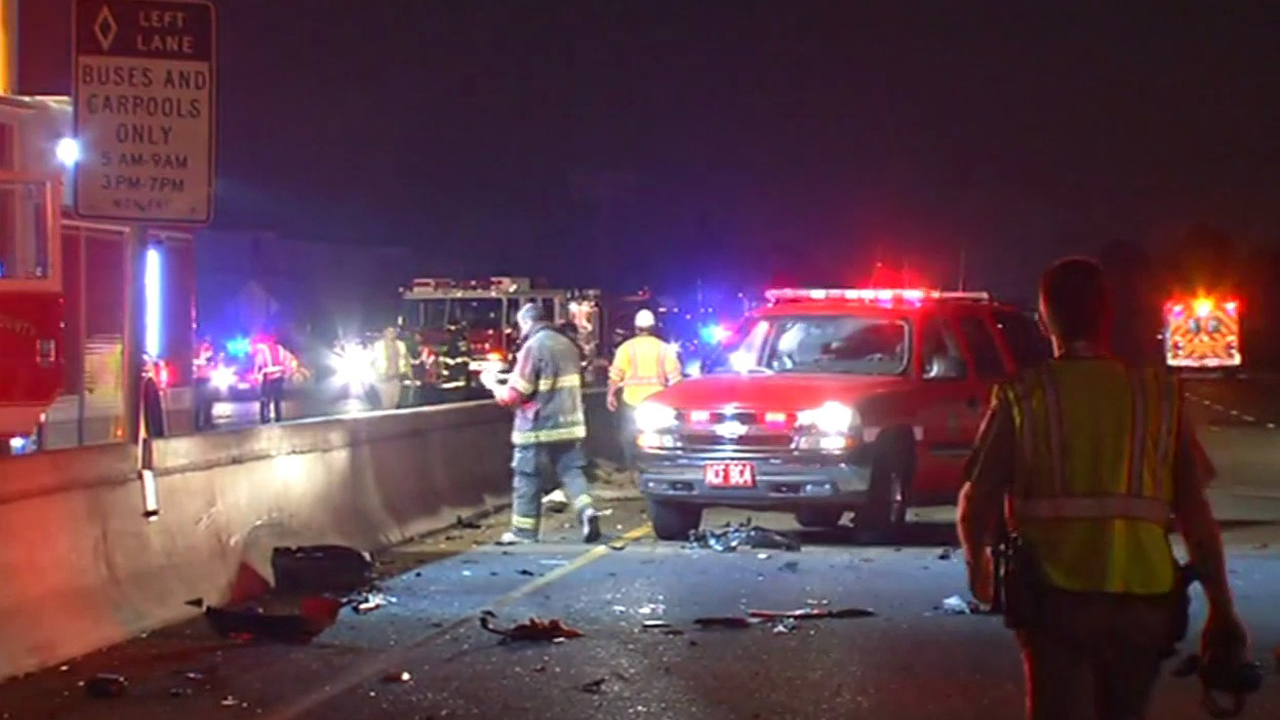 The CHP issued a Sig-Alert this morning following a crash in the northbound lanes of the Interstate Highway 880 involving at least 12 vehicles, including a big-rig truck. At least one car caught fire.

Nine people were taken to the hospital, three of them were in critical condition. Investigators say an SUV traveling southbound on I-880 in San Leandro crashed into the guardrail. A big-rig then tried to avoid the wrecked car and swerved, only to end up crashing through the center divider and into oncoming northbound traffic. At least 10 cars crashed. That's when authorities closed I-880 in both directions.

One emergency responder said it felt like a movie scene: A car was on fire, people needed help, some people were screaming and running from the scene, a helicopter landed on the freeway to rescue a crash victim, cars in both directions came to a stop.

"It is uncommon for the freeway to be shut down in both directions. This was a major accident. There's a lot of debris on the road, a lot of diesel fuel," said Alameda County Fire Department Div. Chief Robert Schnepp.

Emergency crews had to tow all of the cars, clean the freeway and repair the center divider, all while drivers sat and watched and waited. Some even got out of their cars to survey the situation and socialize.

"I work for USPS, so I am just nervous about our trucks stuck southbound," said Glenn Armas, a Hayward resident. "I've been here since 3:08 a.m. this morning. Hopefully I won't have to go into work. I've been calling in telling them our status."

Some drivers got so desperate they tore down a chain link fence and drove through a hole to escape the shutdown freeway.

"They are in a hurry to get somewhere," said Lamarr Wigfall, a San Leandro resident. "I am too. I was supposed to be at work at 4 a.m. so, it is what it is."
Related topics:
trafficsan leandrocar accidentschpalameda countycar accidenti 880trafficcar firetraffic accident
Copyright © 2020 KGO-TV. All Rights Reserved.
More Videos
From CNN Newsource affiliates
TOP STORIES