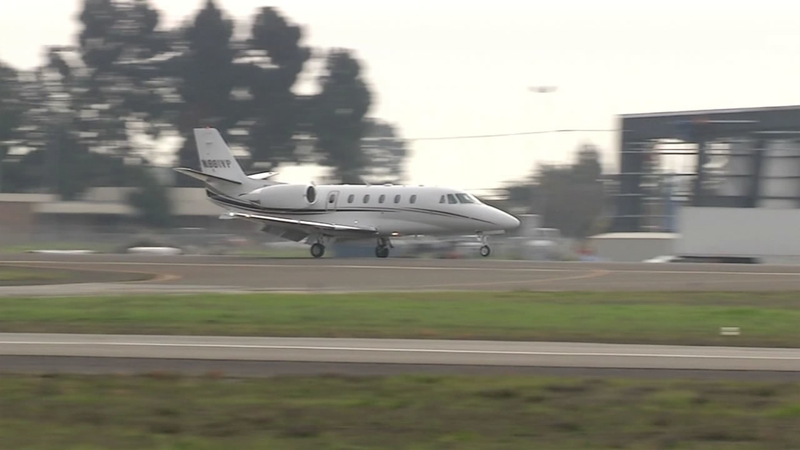 HAYWARD, Calif. (KGO) -- Super Bowl 50 tickets aren't cheap and that means a select few high rollers will be traveling into the Bay Area in style next month. The Bay Area's airports are preparing for an influx of private jets.

The Hayward Executive Airport sees about 30 flights a day, half of them jets. But with the Super Bowl that's about to change.

Thomas Panico runs the A.P.P. Jet Center. They provide fuel and services for private jets and they're bracing for a storm. "We're preparing for approximately 120 extra aircrafts flying into this field," Panico said. "We have to fly in staff from other locations, which we will, we're probably doubling our normal staff."

Hayward's just one of the airports seeing a flood of small jets.

"We were told there's upward of 1,000 aircrafts coming to the bay for the Super Bowl," said Michael Davich, Sky7 HD photographer.

The FAA briefed TV news helicopter pilots on the extra traffic and the no-fly zones.

"They're gonna really clamp down on where, who, and when can be in the air around the venues," Davich said.

It could mean a traffic jam in the sky and on the ground.

"We're shutting down one of the runways. We'll be parking aircrafts on our short runway, leaving the larger runway open. We'll be using taxiways," Panico said.

With an expected tenfold increase in jet traffic, it's going to take more than these leather couches to handle all the people who come with those airplanes. At the Hayward Airport, the big game calls for something bigger.

"We're actually leasing out a 12,000 square foot hangar from one of our customers, and we'll have seating areas, we'll have an 80-inch screen for a Super Bowl party for the crew to watch the game while their passengers are at the game," Panico said.

More than 200 pilots and co-pilots are expected and the people paying them are not all simply wealthy fans.

"With stockholders looking over your shoulder, jets are a business tool, just like a fax machine or a copier," said said Doug McNeeley, an airport manager. "So, they might be entertaining clients here, they might be doing something else that has a business reason as opposed to something that's just fun."