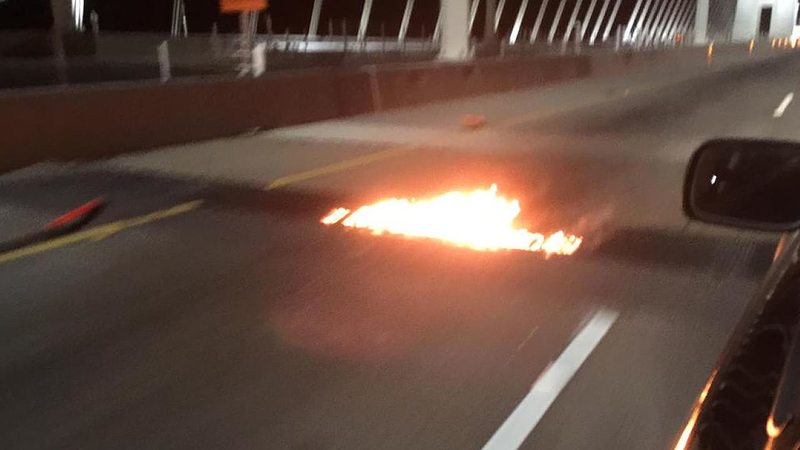 OAKLAND, Calif. (KGO) -- CalTrans officials say a fire that broke out on the eastern span of Bay Bridge Monday night may have been sparked when debris caught fire from a cigarette.

The thought of seeing flames erupting from the roadway on the Bay Bridge is enough to make any driver want to stay home. "That is scary. I have no idea what in the world I would do," Denisha Gammage said.

It happened on the eastern span heading into Oakland around 10 p.m. Firefighters told ABC7 News it looked like some debris had caught fire and it was knocked down pretty quickly. It happened right before the Treasure Island exit near the left shoulder in lane number one.

Officials are taking a close look at a section of roadway that caught fire to figure out exactly what happened. "We do know that we did not have workers working at the time, so there is some consideration that the fire occurred due to the traveling public," Bay Bridge spokesperson Leah Robinson-Leach said.

Officials say a joint seal is what caught fire and say it's possible someone tossed a cigarette out the window. "If someone flicked a cigarette or something like that, that can cause that kind of fire," Robinson-Leach said.

There is a black spot where the fire happened, but officials say the bridge is fine.

When ABC7 News showed a picture of the fire to drivers, they say they couldn't imagine encountering that while driving. "I would probably think the bridge was falling apart other than that I would stop, I don't know," Noelle Martinez said.

"I am already nervous on bridges. I don't know why I visualize so many bad things happening on bridges, I try to get across as soon as humanly possible, so to know that happened on the bridge is nerve wrecking," Gammage said.

Some drivers were left wondering what if this happens again? "I think about my safety and did they put it together safely right and how can we prevent that," Martinez said.

Fortunately the fire did not cause any accidents.

CHP will have the #1 and #2 lanes on Bay Bridge closed while Caltrans evaluates location where fire was located. pic.twitter.com/DO3f7iJAgr