Children injured after school bus crash on I-80 in Berkeley 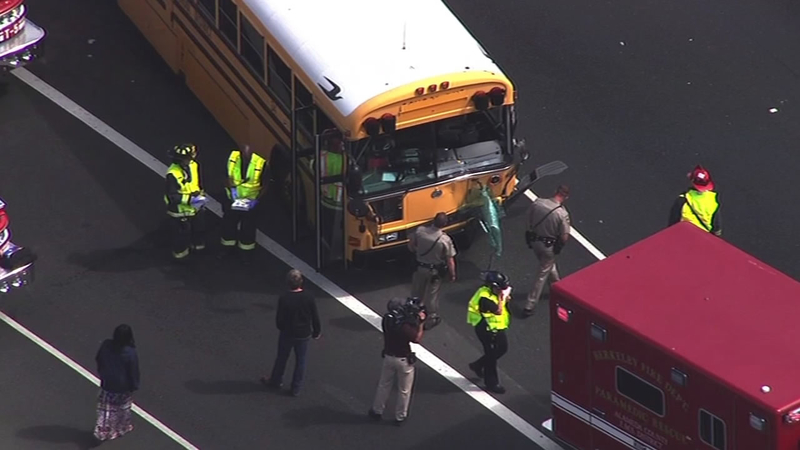 Bus full of children involved in multi-vehicle crash in Berkeley

BERKELEY, Calif (KGO) -- A bus full of children was involved in a multi-vehicle collision on Interstate 80 in Berkeley Monday afternoon.

It was a school bus loaded with kids, aged 5 to 15, headed to a park in Oakland as part of their summer day camp experience.

Minor injuries on I80 for more than a dozen kids on bus, day summer campers from Camp Kee Tov in Berkeley.#mapit pic.twitter.com/8fpyDhc6Bs

The bus suddenly crashed into a van in front of it on I-80 and none of the children were wearing seatbelts.

The crash set off a chain reaction that involved six other cars, an accident that prompted a large-scale response from emergency personnel.

"They had multiple drivers who had sustained injuries. Fire was called to the scene. They immediately set up a triage, classified the injuries, most of them being minor injury," CHP Sgt. Melissa Kittell said.

Four others, drivers in other cars, were also treated at area hospitals.

"We had a total of 23 patients that were transported and an additional 17 that were not injured," Berkeley Fire Department Asst. Chief Abe Ramon said.

California law requires buses built after July 1, 2005 to be equipped with seatbelts. The older Berkeley Unified School District bus involved in this accident did not have seatbelts.

Berkeley school bus after collision on I80. 50 kids on board. 19 had minor injuries. #mapit pic.twitter.com/NZ3QEvqDx5

UPDATE: A second school bus has arrived to transport kids in accident on I-80 in Berkeley. http://t.co/yUFlU3ykei pic.twitter.com/dkS4EnRIkN