Delivery truck driver dies after crash on I-680 in Danville 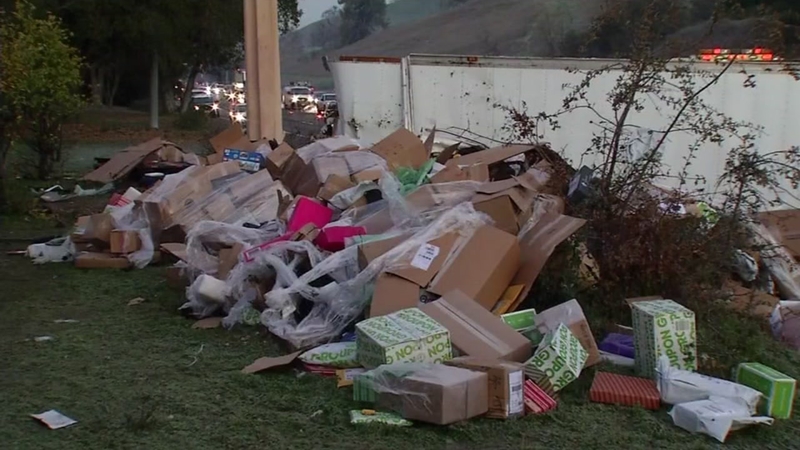 Delivery truck driver dies after crash on I-680 in Danville

DANVILLE, Calif. (KGO) -- There was a big mess on the biggest shipping day of the year. Thousands of holiday packages damaged after a deadly crash on southbound I-680 in Danville at Pintado Road during the morning rush hour.

Police say a delivery truck drifted onto the shoulder then hit an SUV.

"The big rig then traveled across the shoulder and struck the large freeway sign," said CHP Sgt. Oscar Pacheco.

The driver of the semi was hospitalized but ultimately died from his injuries. No one else was hurt. Police think the SUV that got hit was an abandoned vehicle

"Fire did an extensive search of the area and it doesn't look like there was anybody in our about that vehicle," said Sgt. Pacheco.

The delivery truck driver was from a private company carrying FedEx mail that was being transferred to the postal service for its last leg and ultimately destined for San Jose. But because the truck crashed during that transfer, here's what happens next: If your package is salvageable the postal service will take it and deliver it as is and should make it by Christmas. If it's damaged or destroyed it will go back to FedEx so they can deal with their customers and that could take longer.

Authorities said the driver was a 26-year-old Sacramento resident. The cause of the crash is still under investigation. The CHP says they're looking into the possibility the driver fell asleep at the wheel or if black ice was a factor, the roads in this area did have ice on them after temperatures dropped below freezing overnight.

HUGE CRASH - driver has major injuries; getting chest compressions when we got to scene at 4:30am. Still at least an hour cleanup left pic.twitter.com/6jOgrSl5ER