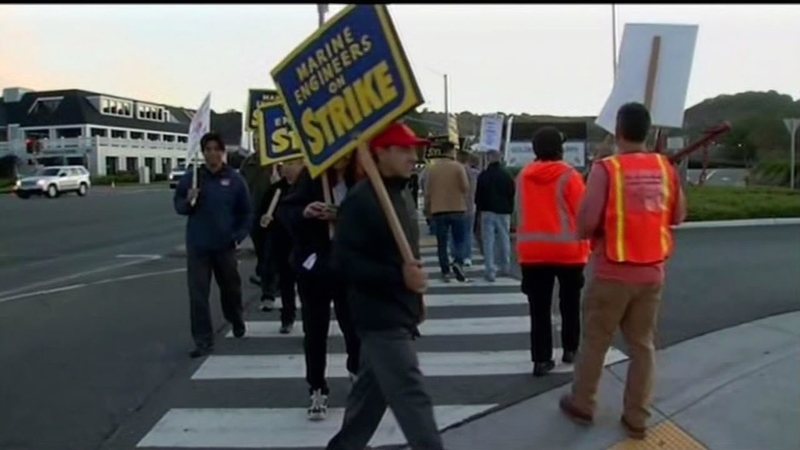 LARKSPUR, Calif. (KGO) -- Marin County commuters who rely on the Golden Gate Ferry system faced the challenge of finding another way to get to work and back home after the boat captains staged a one-day strike on Friday.

Some commuters ABC7 News spoke with said they showed up, but the boats were shut down.

At least a dozen Golden Gate Transit bus drivers called in sick Friday, which forced cancellation of some bus service during this one-day strike.

The ferry captains say they're sorry for the inconvenience, but say they felt they had no option in their dispute over wages and healthcare.

"It's the last place we want to be. I mean we want to be at work, we want to be taking people across the bay to work, but we feel like we've run out of options. Negotiations haven't stalled, especially disappointment they went on strike even though negotiations are continuing," Robert Barley said.

The ferry captains were reluctant to call this strike, but they're unhappy with the way negotiations are going regarding wages and healthcare.

So on Friday, those ferries stand still and of course that had a ripple effect on the evening commute.

Forget a breezy Friday ferry home, Tiffany Pomfret is stuck waiting for the bus. "Going home is really the problem and can take up to an hour and a half to get to San Rafael," she said.

Compared to just about 30 minutes to cross the bay by ferry. On Friday morning she noticed the crowds.

Bus riding regulars like Chris Lofgren expect Friday afternoon to be worse. "I guarantee there will be extra traffic because there's always more traffic on Friday's anyways," Lofgren said.

Lofgren hopped on the 1:50 p.m. to Mill Valley, opting to leave work early. At least three others who boarded with him say they would have taken the ferry if the boat captains weren't on strike.

About 700 people had ferry tickets to the Giants game Friday night.

The bridge district promises their fares will be reimbursed.

The company hired traffic directors to help. Mick Jones King of Cones, as he likes to be known, has car regulation down to a science.

Still drivers are frustrated with the delays. "I live on that corner right there and I come out on a one way street so I have no other options, but to do this and now we're going to be late," one driver said.

Perhaps the silver lining to the line of brake lights is pedestrians can roll right through the intersection. "I'm lucky but those who drive are not," one woman said.

Oracle World will impact SoMa through Friday and regular ferry service is expected to resume on Saturday.