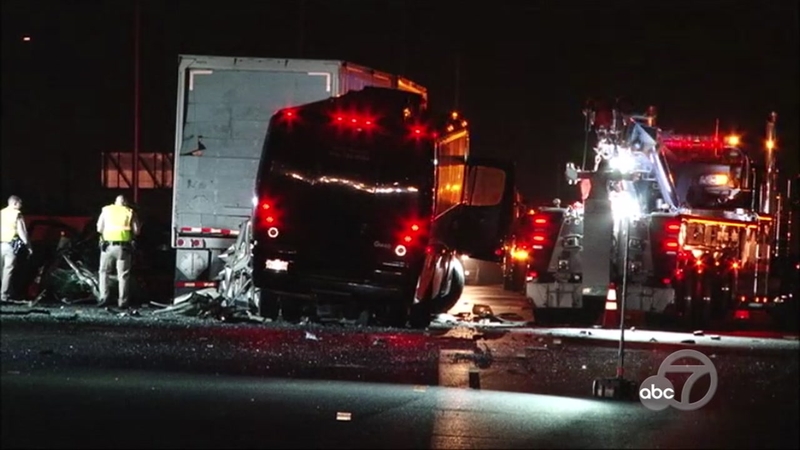 At least 2 dead after multi-vehicle crash on I-880

UNION CITY, Calif. -- A 57-year-old Hayward woman and a 46-year-old San Lorenzo man were killed in a four-vehicle crash on northbound Interstate Highway 880 in Union City Tuesday night that involved a tour bus and a UPS truck, according to the CHP.

The tour bus, which wasn't carrying any passengers, was traveling north on Highway 880 south of the Whipple Road exit at a speed of 65 mph or faster at about 10:40 p.m. Tuesday when it collided with the rear of a 1997 Lexus, CHP officials said.

The impact pushed the bus forward and on top of the back of the Lexus, and the Lexus was pushed to the left and out of the path of the bus, according to the CHP.

The tour bus continued forward and collided with the rear of a 2011 Ford. The bus then pushed the Ford forward into the rear of the UPS truck and the Ford became compressed between the bus and the truck. After that, the tour bus drove on top of the Ford, CHP officials said.

The driver of the UPS truck, a 61-year-old Salinas man, complained of pain in his neck but the tour bus driver, a 29-year-old Oakland man who started the collision, didn't suffer any injuries, according to the CHP.

None of the vehicles were carrying passengers.

The collision forced the CHP to close all northbound Highway 880 lanes in the area for about seven hours. They finally reopened at 6:16 a.m. today.

The CHP said the collision is still under investigation and anyone who has information about it should call their Hayward area office at (510) 489-1500.