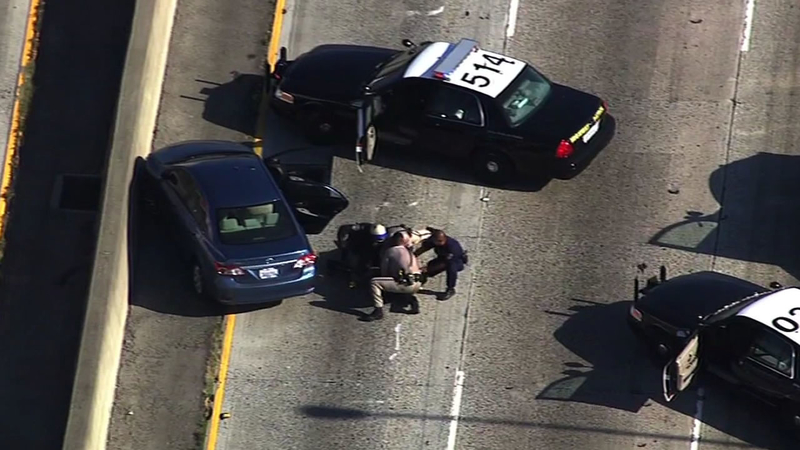 OAKLAND, Calif. (KGO) -- There was an intense struggle at the end of a CHP chase in Oakland. The incident took place just before 9 a.m. on Interstate 880 near 23rd Avenue, south of Downtown Oakland. Officers began the chase a few miles away receiving reports of a reckless driver hitting several cars.

The CHP took down 32-year-old Haroon Rafie of Union City. An eyewitness described the minutes before the crash and cops moving in, guns drawn.

"We heard all the sirens coming, and we turned around and looked and here comes this little blue car. CHP ran in front of him, jumped out with his gun, smashed the window and started dragging the guy out," eyewitness Dennis Starks said.

"We've determined that he was under the influence of some kind of drug," CHP Ofc. Sean Wilkenfeld said.

The CHP says they had to use force and a Taser to get control of Rafie, the registered owner of the blue Toyota. They say he didn't stop when officers hit their lights and sirens. Rafie crashed his car near 23rd Avenue and I-880, but police say his reign of terror on the freeway started several miles earlier.

"At 580 and Eden Canyon Road, which is in Castro Valley, people were calling in that he was a reckless driver. He was driving too fast, swerving in and out of lanes," Wilkenfeld said.

The CHP says they received a total of 23 911 calls. Rafie was placed on a stretcher in restraints while a medical team under police escort, transferred him to Highland Hospital for a medical evaluation. It is standard operating procedure when force in used in an arrest.

"We're going to add some charges onto his arrest as well. He's going to be looking at felony evading charges and we've gone from three hit and runs to a possible total of five now," said Wilkenfeld said.

CHP says cars were smashed, but nobody was hurt and that the successful stop and arrest could not have been done without the public's help.

"An impaired driver is definitely not somebody you want on the road with you," Wilkenfeld said.