KGO
By David Louie
SCOTTS VALLEY, Calif. (KGO) -- The rain may be taking a break, but not the forces of nature. The mudslide danger on Highway 17 near Scotts Valley forced Caltrans and CHP to close the four-lane highway. Caltrans says one southbound lane reopened on Friday evening but northbound lanes are still closed.

One lane of northbound Hwy 17 is expected to open at noon on Saturday.

Engineers were worried the slide area may send boulders and trees crashing down on vehicles.

This is a setback on multiple fronts. The hill just north of Vine Hill Road is showing signs it could slide again. Small rocks are tumbling down its scarred face.

It's a setback for Caltrans contractors because they've stopped work on clearing this week's slide after one worker was killed and another injured on the job Thursday by a dump truck backing up.

It was a setback for drivers who use Highway 17. Caltrans and CHP shut down the stretch of road, forcing vehicles to take long detours.

A Caltrans engineer deemed the slide area just too dangerous. "We don't want to take any chances and right now, that engineer, he's looking at that and saying this has the potential of going right across. When you have traffic going slow through that deviation, it can be more than one car that gets hit in that landslide. So we have to do the thing that's safest for everyone," CHP Santa Cruz Ofc. Sam Courtney said.

An engineer and a geologist walked the precarious slope to evaluate its potential to send rocks, boulders, trees and mud into the road below. The two northbound lanes are still covered by the slide earlier this week that overturned a pickup truck and sent it across to the opposite side.

Caltrans dispatched a landslide expert up from San Luis Obispo to do additional study.

On top of detouring traffic, CHP officers also intercepted a driver on suspicion of being under the influence. Multiple calls came in from drivers who said they saw him drinking beer and urinating in public. CHP said he also got aggressive with an officer.

"He was trying to pull out some type of a pocketknife. He wasn't going along with the instructions the officer was giving to him, so we secured him in the car until other units could get here," Courtney said.

Caltrans so far has not decided what it plans to do. It's possible that detours over 17 will stretch into the weekend until a final determination is made.

TRAFFIC UPDATES: Download the ABC7 News App for breaking news and updates. Turn on push notifications and we'll let you know as soon as Highway 17 is reopened. 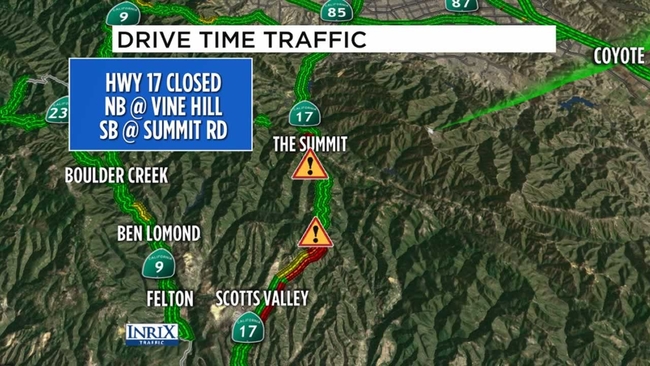