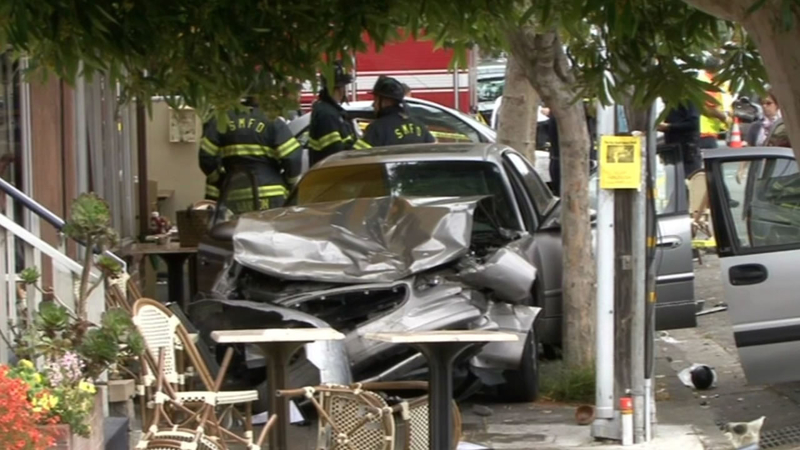 SAUSALITO, Calif. (KGO) -- A wild police chase ended with a number of injuries and a crash into two businesses on Tuesday morning. At Bridgeway and Spring streets in Sausalito, a domestic violence suspect crashed a car after leading sheriff's deputies on a crazy chase.

Police identified the driver of that car as 20-year-old Derrick McCann from Marin City. Police say he initially committed domestic violence and robbed his child's mother on Monday.

When a sheriff's deputy recognized his car Tuesday morning, McCann allegedly took off.

A sign on Fred's Place says the restaurant is closed due to an unexpected event.

Surveillance video from Fred's Place shows just how unexpected it was. The suspect's car slides onto the sidewalk, crashes into tables and pins a customer against the wall. Looking at the start of the accident, you can see another car, a Ford Focus, spinning into a building in the background.

Witness Ken Azevedo stood just footsteps away. He said, "A screech, two flashes and all the glass. Then I saw him make a four door car into a two door car, that's how fast he was going."

Although the car wouldn't budge, the driver police identified as McCann, didn't give up. He allegedly bolted into an alley.

Azevedo saw him and yelled, "There he is! There's the guy!"

As folks scrambled to help McCann's girlfriend and her 2-year-old son trapped in the car, others corralled McCann onto Saylor's roof.

Eventually, he jumped into the crowd. Video shows officers running to arrest him.

"It was like an army of people who just came together," Azevedo said.

Police say McCann hit four vehicles including a deputy's cruiser before stopping outside Fred's. There were roughly 20 customers in the restaurant that came close to tragedy.

"We are very fortunate that we didn't have more injuries or even fatalities in this incident," Sausalito Police Chief Jennifer Tejada said. "The man who was pinned against the wall actually walked away. Several Good Samaritans came and moved the car away from him and he walked away."

Inside McCann's car, the woman and her son weren't as lucky. Police say the boy was not in a car seat. They went to the hospital along with McCann and a person in the Ford focus.

The owner of Hair Solutions says the structural damage can be undone.

The salon and Fred's Place will reopen on Wednesday.