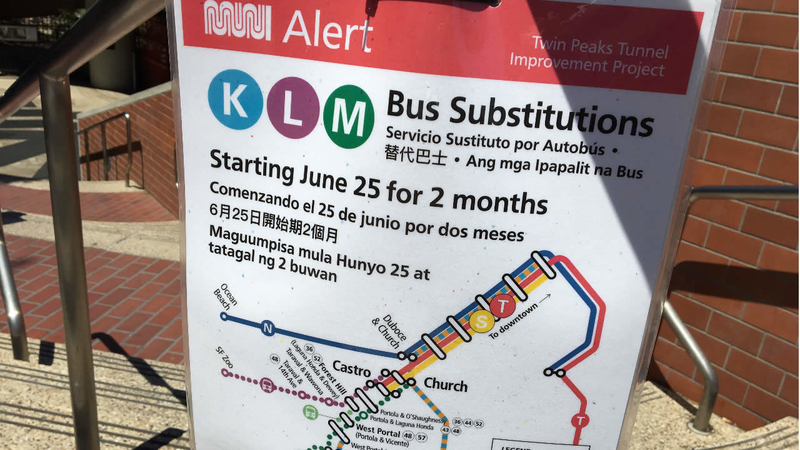 SAN FRANCISCO (KGO) -- MUNI Metro passengers living on the southwestern part of San Francisco will now have to take a bus to get to downtown while crews make repairs to the Twin Peaks Tunnel over the next two months.

The Muni Metro K, L and M lines serve 80,000 customers every day. Some of those passengers will now have to take a shuttle bus to other stations. That's because the West Portal and Forest Hill stations will be closed while the Twin Peaks Tunnel is repaired.

ALERT: The Twin Peaks Tunnel will be closed for two months. Do you know what to do? @sfmta_muni pic.twitter.com/7JPkQzcyDJ

The Tunnel, in use since February 1918, needs a lot of work. "So that includes track work, it includes work to the walls and it also include work on the drainage system as well for the next generation of MUNI riders," said Erica Kato, deputy spokesperson for the San Francisco Transportation Agency.

The rails here are so old that trains are forced to slow down once they enter the tunnel.

The SFMTA has placed notices at several stations and door hangers on handrails are there to make sure everyone understands the changes. "I've gotten the sheet and I'm going to look at the sheet when I have to figure out what to do," said Ron Lichty, a MUNI Metro passenger.

He was in luck, the SFMTA representative who was at the West Portal Station. took time to explain what he needed to do.

Those who are used to coming to the West Portal station will now hop on the L bus, while those who take the MUNI Metro at Forest Hill will take the M bus near the station on Dewey Boulevard. "Those buses will be dropping people off at either Castro or church stations," explained Kato.

And from there they can board the MUNI Metro to downtown. Alex Newburgh has taken a shuttle here before and knows it's an inconvenience. "It took a lot longer and there were less people that could get on. There was a big line so it take twice as long as the MUNI," said Newburgh.

The SFMTA says plan ahead, leave early and be patient because it will only seem like a long two months.