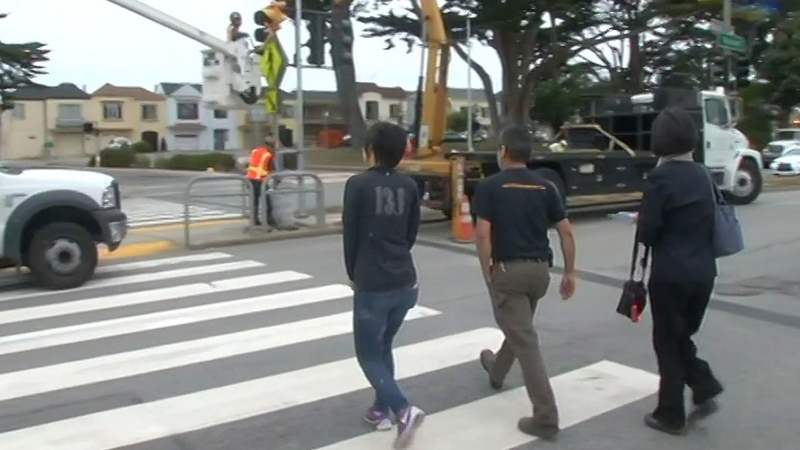 SAN FRANCISCO (KGO) -- San Francisco officials say far too people are hit or killed while walking in the city each year. Mayor Ed Lee is asking residents to help the city make strides in fighting this problem.

On Monday, at Sunset Boulevard and Yorba Street a new traffic signal was just turned on.

Sunset Boulevard falls into the 6 percent of roads responsible for 60 percent of accidents in San Francisco. Now city leaders are taking big and small steps to address the transportation problems.

On May 8, 2014, a 21-year-old woman suffered traumatic injuries crossing the street at the same location.

This week the mayor turned on a traffic light many hope will signal the end of pedestrian accidents at that intersection. Now pedestrians can cross Sunset with a red light halting all cars.

"Having a signal makes it very clear who has the right of way at a major street like this," Walk San Francisco executive director Nicole Schneider said.

Outer Richmond resident Quentin Ikehara braves Sunset traffic about once a day. He said, "Now there's a stop light, it's obviously a lot better, and now it is safer for everyone."

This light is just one of many projects the city hopes will improve pedestrian and commuter safety. At Monday's event, Lee's signature sent a $500 million transportation bond to the November ballot.
It would not make property taxes go up, but rather reallocate general obligation funds.

Lee said, "So if we don't pass this bond, we're in serious hurt for transportation infrastructure that's needed to make the streets safer."

About $360 million would go toward Muni and transit improvements that could reduce some commutes by up to an hour. The rest of the money would be dedicated to making streets safer by modernizing traffic signals and bikeways.

Schneider sees the bond as critical to reducing pedestrian fatalities. She said, "About two people each week are either severely hurt or killed in our city. So these are things that are preventable, we know what solutions can be put in place and this is a good example of that."