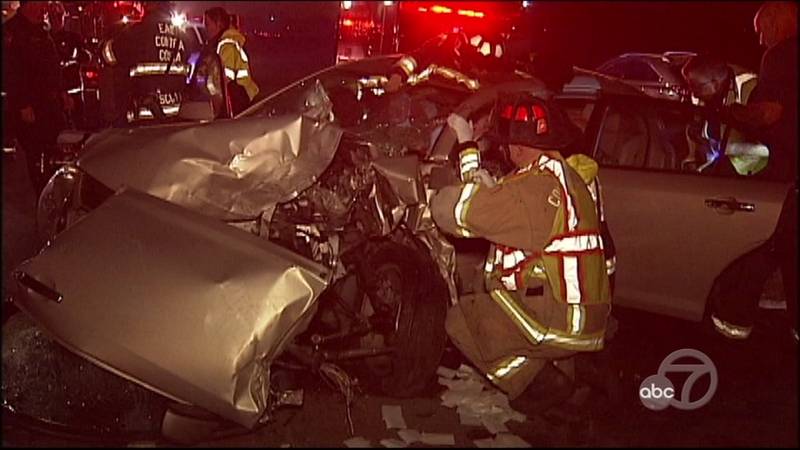 A woman has been arrested for felony DUI after as many as seven people were seriously hurt in two separate but related accidents on Highway 4 in Discovery Bay.

DISCOVERY BAY, Calif. -- A Discovery Bay woman has been arrested on suspicion of felony DUI after she was involved in two accidents within the span of a few minutes in unincorporated Contra Costa County near Discovery Bay, the California Highway Patrol said.

The first accident was reported at 5:12 p.m., when the white Subaru driven by Campbell struck a Harley-Davidson motorcycle on eastbound Highway 4 just east of the County Highway J4 (Byron Highway) intersection, Correia said.


Campbell allegedly drove away from that accident, headed east on Highway 4, where, about 500 feet from the first accident scene, the white Subaru ran head-on into a westbound Saturn sedan carrying five people. All occupants of the Saturn were injured - three with critical injuries and two with moderate injuries. They and the motorcyclist were all taken, in ambulances or by helicopter, to area hospitals --- two each to John Muir Medical Center in Walnut Creek, Eden Medical Center in Castro Valley and Sutter Delta Medical Center in Antioch.

Highway 4 was closed in both directions for about 90 minutes after the accidents, and reopened about 6:45 p.m.
Report a correction or typo
Related topics:
trafficdiscovery baycar crashhit and runaccidentmotorcyclescrashhit and run accident
Copyright 2021 by Bay City News, Inc. Republication, re-transmission or reuse without the express written consent of Bay City News, Inc. Is prohibited.
More Videos
From CNN Newsource affiliates
TOP STORIES