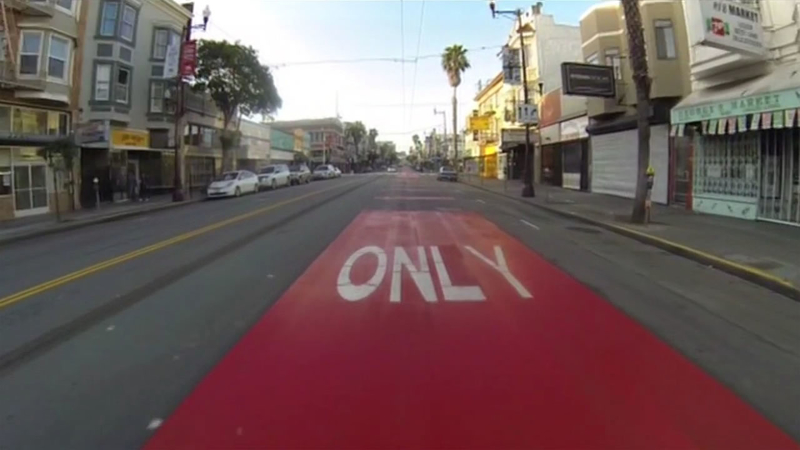 It belongs exclusively to buses and taxis and it is zippy, but to clear the way for them, cars are being diverted.

Muni says the ride is two minutes faster right now and when the project is finished next week, it will be five minutes faster. But the speed comes with a cost.

Public transportation officials are getting an earful from people who are sitting in backed up traffic as they are forced to turn right off of Mission, so are the officers who are out here guiding the drivers.

What do you think about the new red lane in the Mission? pic.twitter.com/6rWmKDtLR5

"I was walking my dog around the corner and this poor guy, the stuff that was coming out of people's mouths," Vickers said.

"Some of the concerns we are hearing is the right turn only lanes are backing up traffic, so we're trying to address concerns as we go forward and make adjustments if appropriate," SFMTA spokesperson Paul Rose said.

Transit officials say this idea is actually 10 years in the making. The hope is to make it safer for pedestrians on Mission and for the bus ride to be quicker.

"Ya it's definitely a little faster, I'm very supportive of it. Very supportive of keeping it in the right turns and everything. I mean it also just makes crossing Mission a lot safer," San Francisco resident Ed Parillon said.

But we were surprised to hear from several bus riders who haven't noticed the difference, even though Muni says the ride is now two minutes quicker.

"I don't think it's making a difference. I wouldn't know. I don't pay attention to two minutes," one rider said.

So is this gain worth the cost?

"We have heard from a lot of Muni riders that this is something that has saved them a lot of time," Rose said.

"You can't not allow traffic to cross Mission Street. It's really not a smart move," Parillon said.

Parillon has been heard and other opponents have been too. Muni is now going to have a community meeting to hear people's frustrations but they also point out that change takes time.