KGO
SAN FRANCISCO (KGO) -- A cruise ship finally set sail from San Francisco Thursday afternoon after the cleanup from a norovirus outbreak delayed its departure for hours. Sky 7HD was over the Star Princess after it docked at Pier 27 in the morning.

It all started on a 15-day Hawaiian cruise when about 30 passengers came down with flu-like symptoms. While the ship was docked in Hawaii, they were confined to their rooms. They finished the cruise and made it back to San Francisco on time, but a lot more people got sick along the way.

Princess Cruises told ABC7 News that 132 passengers had some sort of gastrointestinal illness. But a lot of the other people getting off the ship had a serious case of germophobia.

"Everybody was getting out with paper towels to press buttons or to get into escalators," said passenger Helen Conway.

She met one of the sick passengers.

"She was violently sick for three days, a lady from England," said Conway. "And she was kept in her room."

The cruise line told ABC7 News that quarantining is part of an elaborate protocol to prevent the spread of disease, developed with help from the CDC. Crew members wear gloves and clean the ship nightly with bleach.

"You cannot get your own food, they just have to give you everything," said passenger Andy Martin. "Even in the buffet. They have to serve everything. And they won't even have salt and pepper on the table because they don't want anybody touching it."

Passengers say at first the captain of the Star Princess told them it likely wasn't norovirus. But then, samples were sent to a lab.

"Out of 20 samples, it was norovirus," said passenger James Conway.

The highly contagious stomach bug is all too familiar to the cruise industry. There've been nine outbreaks reported this year, including one just a month ago aboard the Celebrity Infinity docked in San Diego.

Princess Cruises had one a year ago aboard the Crown Princess, when it stopped here in San Francisco.

"I'm actually not at all worried about it," said passenger Tracey Flattes. "We've cruised a lot of times and we've never once gotten sick on a cruise ship."

Flattes and her two kids showed up for her cruise to Vancouver and got a letter that boarding would be delayed for a thorough cleaning.

Some folks were not happy.

"I am diabetic," said passenger Janke Koinoff. "I cannot walk enough to go do something else, I'll get too tired. So we're just stuck sitting here for four to five hours."

Flattes disagreed, saying, "I'd rather be safe than sorry. And two hours out of my day, we're in San Francisco, it's a great city, we can go explore."
Related topics:
travelsan franciscohealthcdcflucruise shipcenters for disease controlpassenger
Copyright © 2021 KGO-TV. All Rights Reserved.
RELATED 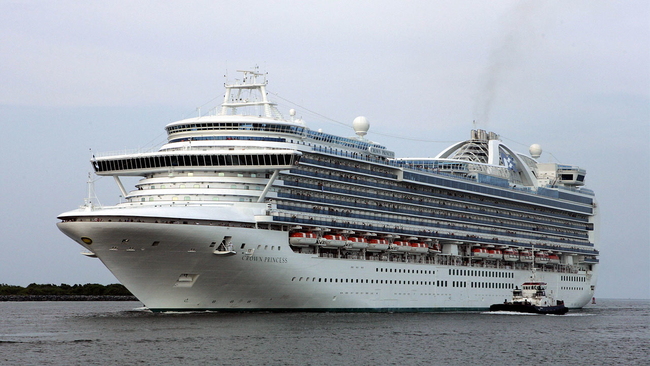