Caldwell has finished the most difficult section, but his partner Kevin Jorgeson has been struggling.

The two men are 14 days into what experts call the most technically difficult climb in the world.

Kevin Jorgeson of Santa Rosa and Tommy Caldwell of Colorado are attempting to free climb the dawn wall on El Capitan in Yosemite National Park.

A fraction of a finger tip, the barest point of a toe, grasping at nearly imperceptible indentations. For years the climbing community assumed the Dawn Wall required equipment to scale.

On December 27th Tommy Caldwell and Kevin Jorgeson set off to conquer it with only their hands and feet.

"When they succeed, it will certainly be the hardest free climb that's been done," said climber Justin Alarcon.

The Dawn Wall earns its name from the southern exposure. Its reputation comes from the alabaster smooth granite that stretches more than half a mile into the sky.

"It kind of gives me fits, it's easy to get frustrated because you'll feel totally fine and your foot will just unexpectedly pop off," Jorgeson said previously during the climb.

The climb contains 32 pitches or sections. Caldwell has cleared the most difficult 20.

Jorgeson's support team just sent a tweet saying he cleared pitch 15 - a huge hurdle considered the crux of the climb.

For the Santa Rosa native, the rest of this climb hinges on his fingertips.

"He's literally cut his fingertips open from these holds, that's a frustrating position to be in because there's nothing you can do but wait," said Alarcon.

Climbers around the world are inspired by watching their progress.

"That's why I'm here on my lunch break, I just want to get better and climb harder," said climber Mae Denayer.

Eliot Carlsen spends three weekends a month climbing in Yosemite. He says even if Kevin doesn't make the summit, this climb should be viewed as a success.

"It was not known if this was possible six years ago when Tommy was looking at this piece of rock," said Carlsen.

Now Caldwell is close to the top, which makes you question, if this can be conquered, what other summit might be reached? 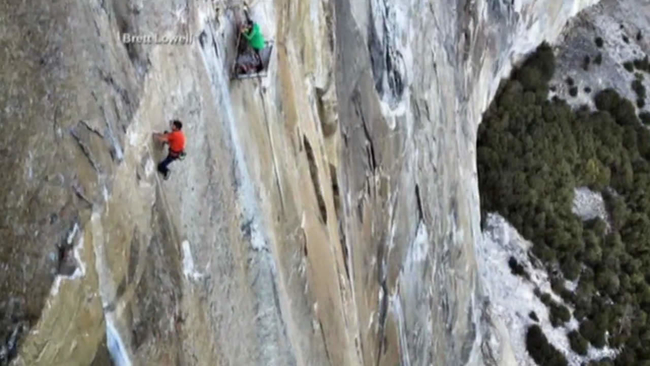