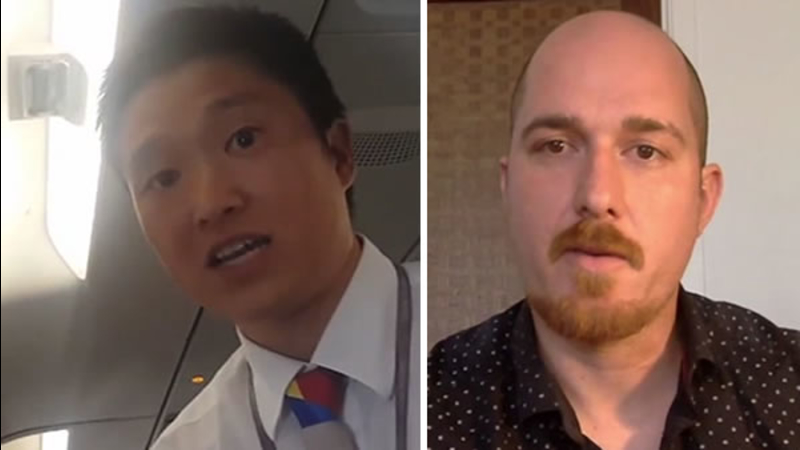 SAN FRANCISCO (KGO) -- A San Francisco man says he was asked to move seats on a plane in China because of his prosthetic leg, and it's all on cellphone video.

Tim Seward took the cellphone video of an Asiana Airline employee asking him to move out of his exit row seat on a flight from Beijing to Seoul on Sunday because of his prosthetic leg.

"I do feel discriminated against," Seward said. He said he paid extra for a seat with more leg room, has sat in exit rows many times and is fully capable of performing the necessary safety duties.

"He even said that I wasn't a normal person and I was trying to record him and I was kind of shaking a little. It was painful to hear," he said. "They threatened me that they were going to kick me off the plane."

So Seward agreed to move to a different seat without extra leg room.

"I think, in this case, he did the right thing," said retired commercial airlines pilot Chris Zwingle. He agrees Seward was discriminated against. However, he said complying and then filing a complaint later is best practice.

RELATED: Man allegedly tries to breach cockpit on flight from LAX to Honolulu

Seward's story has elicited a strong reaction on social media, from a flying public bombarded with stories this year of passengers being mistreated on planes.

Many of the incidents are being captured on cellphone video, like Dr. David Dao being dragged off a United flight.


RELATED: Airline satisfaction at an all-time high, according to new study

"I feel like it's making it easier to hold people accountable for their actions because, in the past when we didn't have videos, it would be one person's word against another," passenger Danielle Griffith said.

The FAA's policy allows physically capable people with prosthetics to sit in an exit row. But ABC7 News is still waiting for comment from Asiana Airlines about their policy in South Korea.

Asiana did reach out to Seward about this incident. They said they needed time to investigate but apologized for what happened.