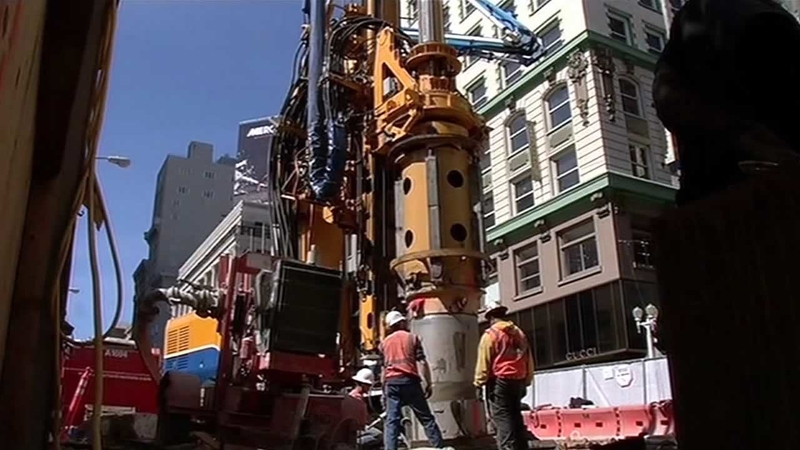 SAN FRANCISCO (KGO) -- The digging of the Central Subway line in San Francisco is over, for now. The two machines that have been boring long tubes through nearly two miles of rock and soil reached their goal in North Beach, but not everyone is happy with the construction. When you have two huge cranes working all day long, it's going to be disruptive to nearby businesses.

"These machines have excavated through 113,000 cubic yards of dirt, soil, rock," Project Director
John Funji said. That would be the equivalent of more than 543,000 barrels of oil. City officials came to see the project including the two boring machines which for a year, excavated two tunnels, each 1.7 miles long.

The two underground machines, affectionately called "Big Alma" and "Mom Chung," will be dismantled piece by piece and sold back to the manufacturer.

The project is the extension of the T-Third Street Line that will eventually take passengers underground through Union Square, Chinatown and North Beach. City officials say this underground extension was needed. The buses on Stockton Street run nearly to capacity.

"Really, for the next generation, for all the growth that is coming to San Francisco, particularly to the east side of San Francisco where the T-Third line runs," SFMTA's Ed Reiskin told ABC7 News.

But the project has taken a toll on many businesses, especially those near Union Square. Mocca is a popular restaurant on Maiden Lane, off of Stockton. But the noise and dust have turned customers away. "Very much so. I think I lost 50 percent. You ask anyone, Mocca, this place at 11:00 was packed," said the owner, Bahram Khadjenouri.

The Central T-Line extension will open to the public in 2019. The final phase of the project is being studied. It would reach Fisherman's Wharf. "Hopefully, with a little bit more work and a little bit more money, we can complete this and connect 16 million visitors in the Fisherman's Wharf and North Beach area to the rest of the city," said San Francisco Supervisor David Chiu.