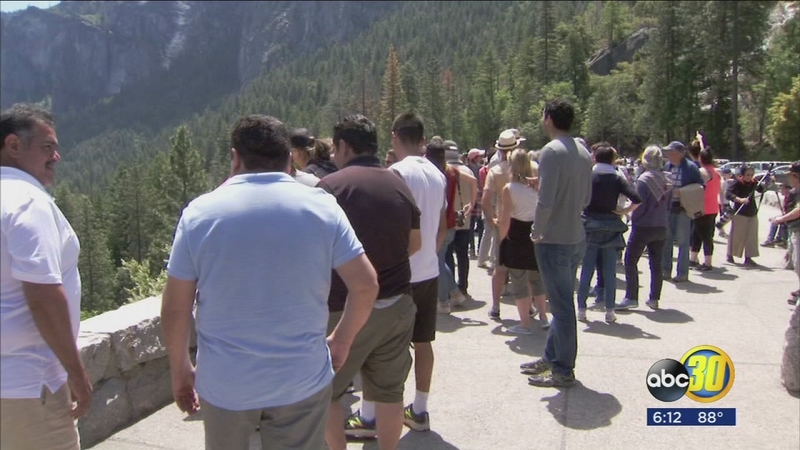 Yosemite maxes out on tourism, traffic

"Welcome to Yosemite," a park ranger said in greeting a new visitor through the gates on Memorial Day.

The entrance to Yosemite is the gateway to a series of picturesque sights, the likes of which are hard to find anywhere else in the world.

"This week is our dream come true," said Jean-Louis To, of Normandy, France. "It's marvelous."

To breathed it all in from Tunnel View -- absorbing blue skies above a horizon of gray rock, green trees, and white water. He says it's better than even the Alps.

But over the holiday weekend, just getting here seemed almost as impossible as the view itself.

"We wait for around one hour and a half just to arrive to tunnel from Glacier Point," he said. "It's the first time we've seen such a traffic jam in a national park."

Yosemite saw a record attendance of more than 5 million visitors in 2016. May is typically the first of six busy months, with attendance peaking in July and August.

But this May, the place is packed. Around the world and across the country, people have heard of a massive snowpack fueling fantastic falls.

Bridalveil Fall blasted people with the patience to find parking and the bravery to climb close.

The water is literally flowing everywhere, even on the south fork of the Merced River at the Wawona campground which, like all the other campgrounds, is full. Many of the campers booked space more than a year ago, and making those plans has proved worthwhile, despite the traffic.