AP
By Ricardo Alonso-Zaldivar and Lolita C. Baldor, Associated Press
WASHINGTON -- The Pentagon will deploy more than 1,100 troops to five vaccination centers in what will be the first wave of increased military support for the White House campaign to get more Americans inoculated against COVID-19.


The Federal Emergency Management Agency has asked the Pentagon to supply as many as 10,000 service members to staff 100 centers. Defense Secretary Lloyd Austin approved the initial five teams, but the others will be approved in separate tranches as FEMA identifies the other site locations.

Acting FEMA Administrator Robert Fenton told reporters that two vaccination sites that will be "predominantly" federally run will open in California on Feb. 16, one at California State University, Los Angeles, and the other in Oakland.

Military troops will staff one of the two California centers, FEMA and Pentagon officials said. Personnel from other parts of the federal government will be at the other one. More sites will open around the country as more doses of vaccine become available.

President Joe Biden delivers remarks on the January jobs report and the economy amid the COVID-19 pandemic on Friday, Feb. 5.

The military deployment comes as the nation is in a race against a virus that is spawning mutations which may make it spread more easily and inflict deadlier disease.

Only about 2% of Americans have received the required two-dose vaccination regimen that confers optimum protection with the Pfizer-BioNTech and Moderna vaccines currently available. To reach widespread, or "herd" immunity, the U.S. must vaccinate 70% to 85% of its population, according to Dr. Anthony Fauci, the government's top infectious disease expert.

That would be roughly 230 million to 280 million people, compared to 6.9 million who are currently fully immunized with two shots.

More help could be on the way soon. Johnson & Johnson announced this week it is seeking emergency use authorization from the Food and Drug Administration for its vaccine, which requires only one shot.


Each of the Pentagon's five military teams includes 222 personnel, including 80 who will give the vaccines, as well as nurses and other support staff. The teams would be able to provide about 6,000 shots a day.

The five teams represent a growing use of the active duty military to a vaccination campaign that already involves nearly 100 National Guard teams in 29 states across the country. National Guard leaders told The Associated Press that they are now considering training additional Guard members to give shots, so that they can also expand vaccinations in more remote and rural portions of their states.

Gen. Dan Hokanson, chief of the National Guard Bureau, said the Guard has the ability to field about 200 additional teams. Training other medical personnel to give the vaccination shots, he said, would potentially provide more.

"If we reach the point where we've fully implemented all of our folks who can (give shots), then they're looking at potential training opportunities if we're going to need more than that," said Hokanson. "We're going to do everything to make a difference and meet whatever that need is."

The Pentagon has said that the FEMA teams could be a mix of active duty, National Guard and Reserves. But Hokanson and Maj. Gen. Jerry Fenwick, director of the Guard's Office of the Joint Surgeon, said that at this point, the FEMA teams are more likely going to be filled largely by active duty troops. The Guard, they said, will probably be tapped by their governors for use in their own states. are more likely to be used in remote, rural locations.

Pentagon officials have made it clear that they are being careful about tapping National Guard and Reserves, because in many cases those service members are already working in medical jobs in their civilian lives at local hospitals and medical centers. Hokanson noted that while the Guard could staff as many as 600 vaccine teams, he has to cut that number about in half because of those types of civilian job restrictions.


He said that so far Guard members are only operating in their own states, but could go to neighboring states if needed in the future, as long as they have enough teams.

Biden has compared the campaign against COVID-19 to a war. Alongside the troop deployment, he also invoked a Cold War-era law called the Defense Production Act to help bolster manufacturing of vaccines, at-home COVID-19 testing kits and nitrile gloves used by health care workers and vaccinators. Referred to as the DPA, the law in essence allows the government to assign missions to private companies during national emergencies.

Manning said also said the government is investing in six manufacturers to develop at-home and point-of-care COVID-19 tests, with the goal of producing 60 million tests by the end of the summer. Earlier in the week, the White House announced a $230 million contract with Ellume, manufacturer of an at-home test approved by the Food and Drug Administration. No prescription is required for the over-the-counter test.

"The country is well behind where we need to be in testing," said Manning. Due to contract issues, he said he could not yet reveal the names of the companies.

Another round of contracts will build capacity to produce surgical gloves in the U.S., including processing the raw materials for the gloves. There were widespread shortages at the start of the pandemic last year. 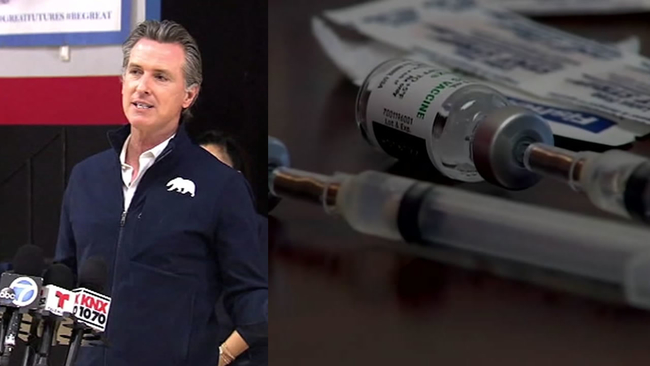