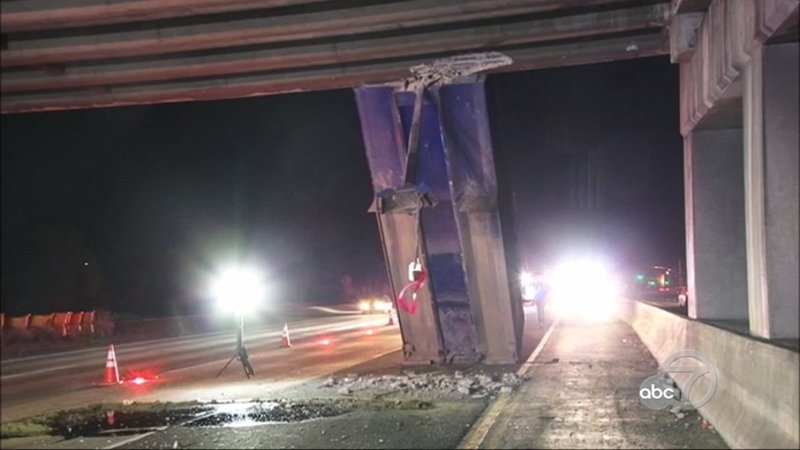 Dump truck slams into overpass on Hwy 101 in Palo Alto

It's not too often you seen Caltrans workers taking concrete off of an overpass. They were taking a closer look at some serious damage caused by the accident. A dump truck with its bed still up hit the overpass just before 11 p.m. Thursday.

"There's a 27 foot crack in the overcrossing from the collision. We just want to make sure it's safe to drive on and under," said CHP Officer Christopher Benavidez.

The driver went to the hospital with minor injuries. The dump truck was towed along with the bed that was torn off, but a mess and a big job was left behind.

Two southbound 101 lanes were closed and one lane on top of the overpass on Embarcadero Road was also closed.

Caltrans sent a structural engineer from Sacramento who arrived around 10 a.m. to give a final look. Now that some of the debris has been cleared, the integrity of the overpass is being evaluated.

When ABC7 News asked why it took so long to get the structural engineer from Sacramento, a spokesperson said they had resources at the scene, but didn't have an answer for that question.