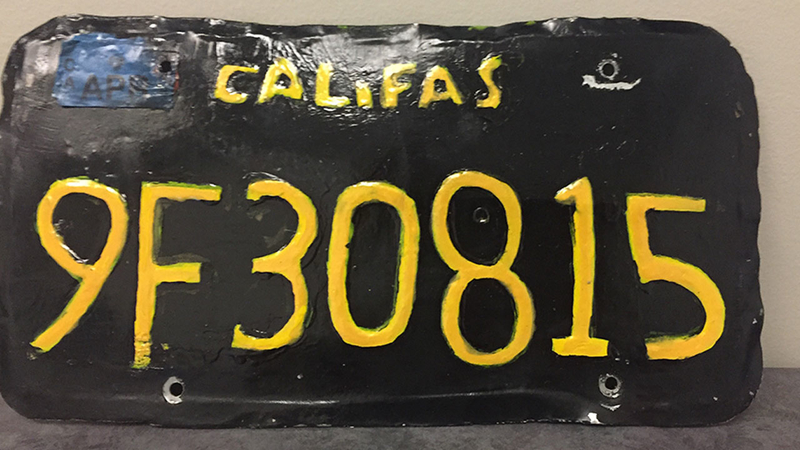 MOORPARK, Calif. -- A truck driver's fake license plate caught the eye of law enforcement in Moorpark and led to his arrest on DUI, meth possession and other charges.

So what gave it away?

The first clue that the plate was not genuine was probably the word "Califas" where it should have read "California." Califas is a Spanish slang term or nickname for California.

Also, the letters and numbers appeared to be painted on by hand and were slightly crooked.

The plate caught the attention of a motorcycle officer in Moorpark who pulled over the tractor-trailer driver.

He determined the driver was under the influence of narcotics and arrested him for DUI, possession of methamphetamine, being an unlicensed driver and having an active warrant for his arrest.

The tractor-trailer he was driving then had to be towed from the scene because it was unsafe to be driven, officials said.

The Ventura County Sheriff's Office, which patrols Moorpark, says they have special enforcement efforts dedicated to trucks and commercial vehicles because of the high number traveling through the city.

Last year, there were 983 traffic and parking citations issued for commercial truck violations. In connection with the enforcement, there were also arrests for offenses such as DUI, and possession of drugs and firearms. More than 60 trucks and commercial vehicles have been towed since Jan. 1, 2018.
Report a correction or typo
Related topics:
southern californiaduimethdriving
Copyright © 2021 KABC-TV. All Rights Reserved.
TOP STORIES
CDC reverses course on indoor masks in some parts of US
Gov. Newsom pulls kids from summer camp with no mask requirement
Barbara Boxer recounts attack near her Oakland apartment
Bear cub recovers from Tamarack Fire burns
Bay Area teen attacked by crocodile while vacationing in Mexico
Black car buyer's experience marred by dealer's 'racist' Facebook post
CSU to require all students, staff to get COVID-19 vaccine
Show More
Simone Biles explains why she 'took a step back' from team finals
Mila Kunis, Ashton Kutcher only bathe kids when they see dirt
Warriors star visits 'sassy senior' florist in new Google video
'This is how I'm going to die': Officers tell Jan. 6 stories
Pfizer, Moderna to expand COVID-19 vaccine trials for kids ages 5-11
More TOP STORIES News