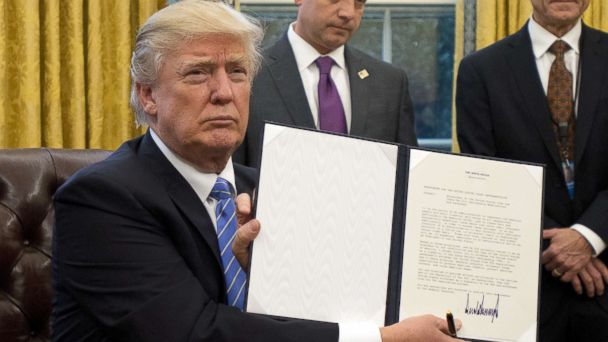 ABCNews
By CONOR FINNEGAN
The Trump administration is expanding its restrictions on U.S. funding for international health care providers and non-profits that perform or promote abortion, Secretary of State Mike Pompeo announced Tuesday.

It's an expansion on what is already the widest implementation yet of the so-called "Mexico City policy" -- one that has won praise from anti-abortion groups, but that critics say is having a devastating effect on rural health care in developing countries.

The policy, named for President Ronald Reagan's announcement in Mexico, has been rescinded by successive Democrat presidents and re-implemented by Republicans since its inception. It originally blocked any U.S. funds for global health from going to NGOs that worked in family planning and reproductive health.

But President Donald Trump expanded that, banning all foreign NGOs that conducted abortions or highlighted it as an option from receiving U.S. global health funds, including international health programs, such as those for HIV/AIDS, maternal and child health, and malaria.

Now, the administration is trying to close the gap even further, according to Pompeo, by refusing to provide funds to any group that gives money to other groups that perform or provide information about abortions.

"This is decent. This is right. And I'm proud to serve in an administration that protects the least amongst us," Pompeo said Tuesday in Washington.

The administration is also punishing the Organization of American States (OAS) because one of the groups it works with conducted "abortion-related advocacy," according to Pompeo. The U.S. will reduce its contributions to the pan-American body that promotes democracy and good governance in the Western Hemisphere and will require a prohibition of funds for any lobbying for or against abortion in any future foreign assistance programs -- a prohibition required by law for all U.S. foreign assistance.

A State Department spokesperson later told ABC News the amount rescinded was $210,000 -- a "proportional share of possible OAS costs" for the action at question, according to the statement.

It's unclear what exactly that action is, but the spokesperson confirmed it involves the Inter-American Commission on Human Rights, a body that promotes and protects human rights that the U.S. pushed for the creation of. In 2018, the group advocated for the repeal of laws that criminalize abortion in all cases, in particular in El Salvador.

The new restrictions won praise from anti-abortion groups for eliminating what loopholes there may have been in the policy, with which Pompeo said "the vast majority of our implementing partners have" complied.

"Money is fungible," said the Susan B. Anthony List, a nonprofit that seeks to end abortion, in a statement. "We are excited to see Secretary Pompeo taking additional steps to ensure that Americans' hard-earned dollars are actually used for health assistance, not funneled to groups that push abortion."

But critics, including some NGOs on the ground, have said the existing policy has already had damaging effects on health care, particularly in rural areas.

Last June, the Center for Health and Gender Equity, or CHANGE, issued a report to show that the already existing restrictions have led to cutbacks for health care providers, many of whom are dependent on U.S. funding. Those cutbacks included closing certain facilities, laying off staff, and providing fewer services, including HIV/AIDS tests and consultations, according to the report.

Pompeo dismissed those concerns, saying, "They're just wrong about that."

"The theory that somehow not protecting every human life is destroying human life is perverse on its face," he added. "One need not perform abortions in order to protect people from HIV" or other diseases combated by US global health initiatives.

The problem, critics like CHANGE say, is that in some communities there is only one health care provider who offers all kinds of services, which may include abortion and contraceptives.

Democrats have re-introduced legislation to permanently repeal the Mexico City policy, with Sen. Jeanne Shaheen of New Hampshire garnering 45 co-sponsors in the Senate and Rep. Nita Lowey of New York with 150 co-sponsors in the House.

In a statement to ABC News, Shaheen blasted the administration's "egregious and dangerous" policies on reproductive health that "threaten access to critical services that prevent maternal deaths, treat HIV and Zika, and provide communities with lifesaving health care."