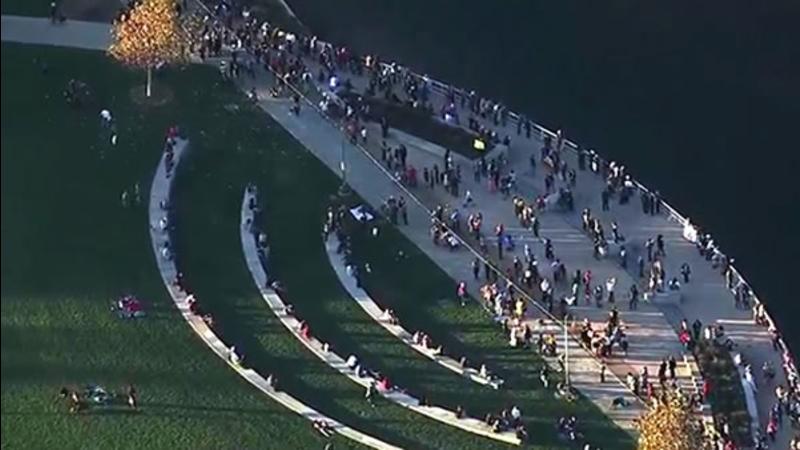 OAKLAND, Calif. (KGO) -- A peaceful demonstration in response to Donald Trump's election as U.S. president was held at Oakland's Lake Merritt on Sunday.

The event, called Hands Around Lake Merritt, calls for community members to gather around all 3.4 miles of the lake and join hands,
symbolizing "healing and empowerment through standing together in solidarity, widening our embrace with all those impacted by this presidential election," according to a Facebook event page.

The gathering began at 3 p.m. and at 3:45 p.m. participants joined hands around the lake.

Thousands of people from communities all over the Bay Area took part in the demonstration.

"I think it's a great way to get your voice heard in a way that is peaceful and not violent," Berkeley resident Julian Monterio said.

The event was shared thousands of times on Facebook.

Rose Ellen Epstein brought a sign, and she asked people to write down what changes they'd like to see. "It's really important that we carry on and protests are a great first step, but then we really need to work toward a systems change. We need to do advocacy, we need to policy change, we need to continue to push for the rights of marginalized communities in our country," Protester Rose Ellen Epstein said.

In the Fruitvale neighborhood, immigrant-rights activists led a march to the federal building.

On Sunday, Trump said he would immediately deport three million illegal immigrants with criminal records. "That's war on immigrant communities. Immigrants who are Americans regardless of their legal status," one woman said.

Berkeley High School student Lupe Vargas' parents are undocumented immigrants. "They're nervous because they've been in this country a long time. They work here and they don't want to go back to Mexico because they left there because they wanted a better life," Vargas said.

More protests and school walkouts are planned this coming week.