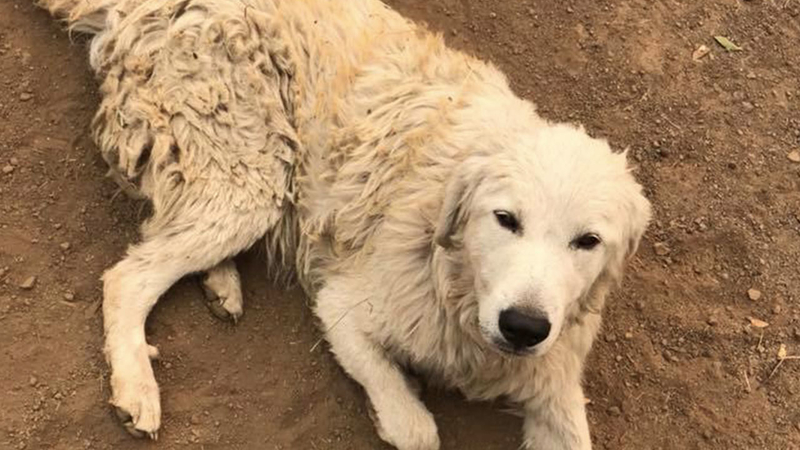 It was just after 11 p.m. when Roland Hendel first saw the flames across the valley from his home in unincorporated Sonoma County. By 11:15 p.m., he knew he and his daughter needed to flee.

They loaded up their dogs and cats, knowing that they would not be able to take their eight goats. But when it came time to leave, Odin, their Great Pyrenees, refused to leave the goats.

"He was determined to stay with the goats and I had to let him do it," Hendel said.

Odin was so determined to stay with the goats that he was even willing to separate from his sister Tessa. The two dogs had never spent more than a day apart since Hendel had adopted them as puppies to help care for his goats. Hendel had rescued those as well, bottle feeding them and building them a barn on his property.

Hendel thought it was a death sentence for the beloved dog as they drove away.

But when Hendel checked in with his neighbors who had remained in their home, they had shocking news -- Odin and the goats had been spotted on their property and it appeared they were all fine.

On Tuesday, Hendel dodged police roadblocks to make his way home, passing trees that were still burning among the smoldering ruins of his neighborhood. He says he was met with cuddles and kisses from eight goats, alive and well. Odin's fur was burned, his whiskers had melted away and he was limping, but he had kept the goats safe. Not only that, there were several baby deer that had joined the herd, according to Hendel.

Hendel returned the next day to check on Odin and the goats, reuniting Odin with Tessa. The animals stayed on the property because Hendel had nowhere else to take them, but they had food and water.

"It just felt like everything was OK," Hendel said.

Hendel's neighbors checked on his animals Thursday morning, but by the time Hendel returned to his property Thursday afternoon, the dogs and the goats had disappeared.

The family is now doing everything they can to find the animals; they are searching the neighborhood, although access continues to be a challenge, and friends are calling shelters.

Hendel is confident, wherever they are, Odin and Tessa are with the goats, continuing to care for them.