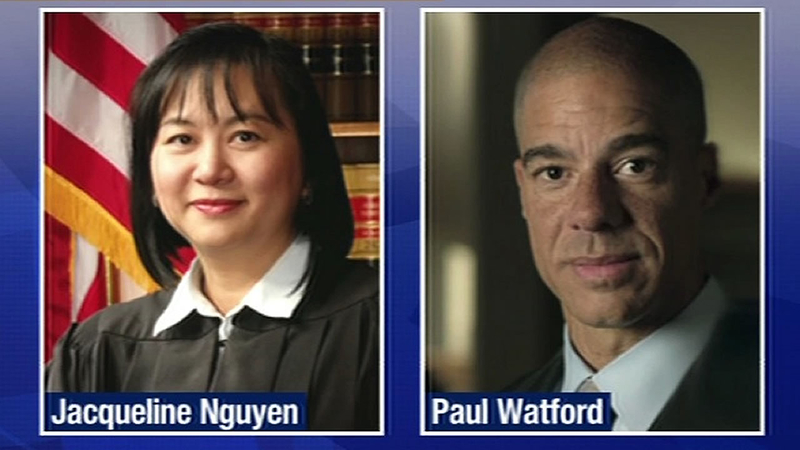 SAN JOSE, Calif. (KGO) -- There is a brewing over the nation's highest court. Three Californians are among a handful of names being mentioned to fill the U.S. Supreme Court slot left open following the weekend death of Justice Antonin Scalia.

However, Republicans are vowing to block any nominee from President Barack Obama. It is all setting up a historic high-court showdown.

State Atty. Gen. Kamala Harris is frequently mentioned as a possible Supreme Court nominee. The problem is she has no judicial experience, is from liberal San Francisco, and her sights appear to be firmly set on the U.S. Senate.

That leaves two appellate judges as perhaps the more palatable choices from California -- Jacqueline Nguyen and Paul Watford -- both from the Ninth Circuit Court of Appeals.

ABC7 Political Analyst Carla Marinucci said, "Both of them have stellar records and both of them would be interesting additions to the court, not only because of the ethnic mix, but because of their background and their history."

Regardless, Senate Republicans are suggesting they may not even hold a hearing, no matter who it is. Within an hour of Justice Scalia's death, Senate Majority Leader Mitch McConnell, R-KY, declared, "...this vacancy should not be filled until we have a new President."

My statement on the passing of Judge Scalia. pic.twitter.com/4JSmbKWzDy

Democrats fired back, including Gov. Jerry Brown, who tweeted, "Couldn't @SenateMajLdr have the decency to wait until the funeral before playing cynical politics. Such obstructionism must not stand."

Couldn't @SenateMajLdr have the decency to wait until the funeral before playing cynical politics. Such obstructionism must not stand.

"I think both sides are willing to roll the dice here. The outcome is going to be very dramatic and it's going to be a battle royal," Marinucci said.