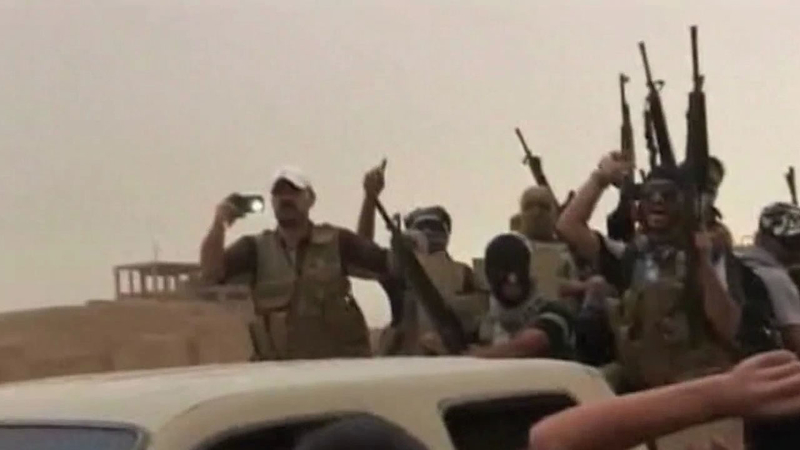 President Barack Obama has dispatched up to 275 troops to Iraq. Sunnis militants have taken over portion of Northern Iraq. They're fighting Iraqi troops on their way to Baghdad. If they get there and take control, it could send the whole country into chaos.

There are also reports the militants are executing groups of prisoners, which is a war crime.

About 200 U.S. military personnel remain in the embassy in Baghdad to help advise the Iraqi military. The American troops being sent in will help keep them secure and are not expected to be in combat. However, the U.S. may decide to join combat using drone attacks.

"It is the weapon of choice the administration. They've used it to great effect in Afghanistan. The downside, which is we found that the use of these drones oftentimes results in collateral damage," David Schenker from the Washington Institute for Near East policy said.

The U.S. has also talked with Iran about how to handle the crisis, but is not considering a military partnership.

Bay Area veterans of the War in Iraq are watching this new challenge very closely and they are sharing strong opinions about what's happening there.

It wasn't uncommon for soldiers to have two or even three tours in Iraq. They spent a lot of time in that country, which is why many are following the developments as closely as they are.

"The Sunnis, Shiites do not get along. They will always fight. They've been fighting since the beginning of time," James Duro of Santa Clara said.

Duro was deployed to Iraq twice as part of Operation Iraqi Freedom. He took a photo sitting on Saddam Hussein's chair at the former presidential palace in Baghdad. He says he's not surprised by the current chaos in Iraq and is all in favor of the U.S. Military to get involved.

"Honestly? I don't think we should have left because, in my opinion, we didn't finish the job. I mean we left without them having a stable government," Duro said.

The Iraq War lasted eight years and during that time, more than 4,000 soldiers died and more than 30,000 were wounded. Emily Yates of Oakland was deployed to Iraq twice as a public affairs specialist. Despite her role, she was never sold on the cause.

"It wasn't something that I felt like, 'Oh my God, I tried so hard to help liberate Iraqis,' because I didn't think that what I was doing was liberating anybody," Yates said.

Yates is now a member of Iraq Veterans Against the War, so it's no surprise that she thinks the U.S. should stay out of Iraq.

There are strong sentiments from the people who were there and whether they liked it or not, helped shape Iraq to what it is today.
Related topics:
politicsdronesiraqwarveteransmilitarypoliticsu.s. & worldiraq warbarack obama
Copyright © 2021 KGO-TV. All Rights Reserved.
RELATED
California contractor struggles to flee Balad, Iraq
TOP STORIES
'Detected outside of SF,' traces of omicron found in sewage
COVID cases in Marin Co. dropped as schools reopened, study shows
Woman accused of stealing $40K in items from SF Target arrested again
Stephen Curry chases history with NBA 3-point record in reach
JFK Unsolved: The Real Conspiracies
How to get more bang for your buck when gifting gift cards
Flagpole with incredible story gets new flag on Pearl Harbor Day
Show More
Hawaii faces life-threatening flooding with more than a foot of rain
Officials to consider changes for dangerous Alameda streets
Breaking down the race for SF's Assembly District 17
SJ family hopes Christmas tree can bring justice in murder case
Elizabeth Holmes faces cross-examination in fraud trial
More TOP STORIES News