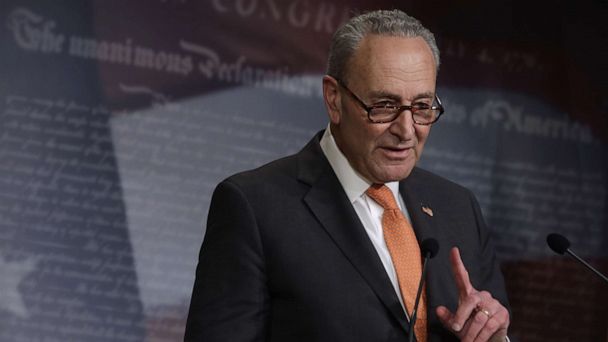 A top Senate Democrat on Friday accused the Trump administration of treating military veterans as "guinea pigs," after the Department of Veterans Affairs disclosed treating 1,300 coronavirus patients with hydroxychloroquine - a drug widely being used in clinical trials and touted by President Donald Trump, but that hasn't yet been shown to be effective.

"In the vast majority of cases at VA, we are prescribing hydroxychloroquine at the final stages of a Veterans' life in the hope that it has some positive effect," Wilkie said in a letter responding to allegations made by Senate Minority Leader Chuck Schumer. "It is being provided when requested by the family as a final treatment option when all other treatments have failed."


Tune into ABC at 1 p.m. ET and ABC News Live at 4 p.m. ET every weekday for special coverage of the novel coronavirus with the full ABC News team, including the latest news, context and analysis.

President Trump has touted hydroxychloroquine as a potential "game changer" in the race to develop treatments for COVID-19. Typically prescribed for malaria, lupus and certain types of arthritis, the drug has not been proven an effective treatment against coronavirus.

The FDA has said doctors can use the antimalarial drug for other, or off-label, purposes, including to treat COVID-19. The drug has been on the market since the 1940s and doctors are familiar with its side effects. The FDA, though, also has warned patients not to use the drug outside a clinical setting or hospital because it can cause serious heart problems in some patients.

A paper published in the Lancet medical journal Friday added to those concerns after finding that people with coronavirus treated with the drug had a significantly higher risk of death and irregular heart rhythms.

"We need to know what the basis was for using this drug against the consensus of science, which called into question its effectiveness in treating COVID-19," Schumer said in a statement Friday. "We also need to know who is authorizing these new trials, what facilities are participating and what families are being told."

The VA said it plans to continue using the drug while at the same time studying whether it's effective in helping stem the spread of a coronavirus infection. A trial at VA facilities is expected for the end of May.

Several hydroxychloroquine clinical trials with front-line health workers and COVID-19 patients are ongoing in the U.S. and around the world.


A cursory review of the drug's use at VA hospitals earlier this year found no positive effects on COVID-19 patients. It indicated a possible connection between hydroxychloroquine and higher mortality rates, but the paper was largely inconclusive and not a peer-reviewed scientific study.

Earlier this week, the president dismissed that review, without evidence, as a "Trump enemy statement."

The VA has previously ordered shipments of the drug. Federal contracts reviewed by Connecting Vets show the agency placed orders in 2007, 2012 and 2015.

A federal watchdog in March found insufficient stockpiles of hydroxychloroquine at some facilities. VA said these findings lacked "merit" and suggested in response that "active investigations" into the drug's effectiveness were behind the supply shortages.