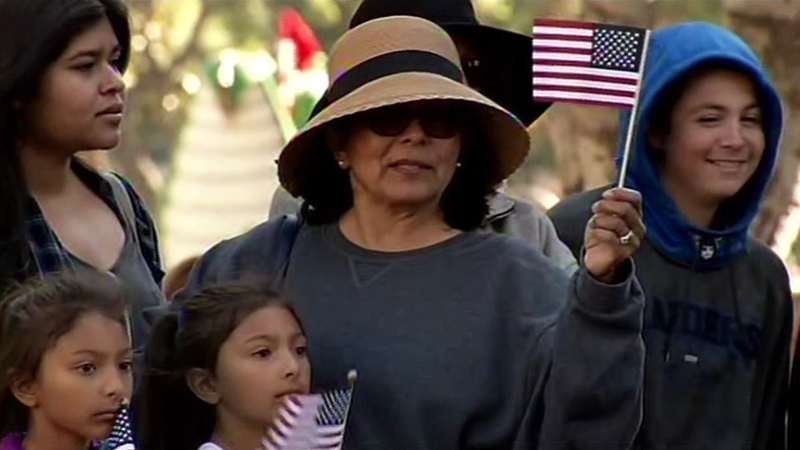 Good afternoon from the #SanJose #VeteransDay Parade! Thank you to all #veterans for their service to our country. pic.twitter.com/ysQVTBLOop

San Jose hosts one of the Bay Area's largest events.

The event includes the Presentation of Colors, the Pledge of Allegiance, the national anthem and a parade in downtown San Jose, which shuts down some city streets.

People lined up early along South Market Street to get the best views of the parade route. "I love it!" said Doris Burns, whose husband Dale, is a Navy veteran. "He likes to have the people come up and thank him for his service. And if they called him tomorrow he would go in immediately."

Many people caught up with old friends, while remembering the sacrifices veterans made to protect our country.

The parade took nearly two hours to make its way through downtown San Jose. From the Cadillacs to the local marching bands, there was something for everyone to enjoy. But the most important part of the parade was our veterans who were truly the stars of the show.

This was a chance to recognize those who have served in our military. "They did a lot for us and they continue to do a lot for us," San Jose resident Delongo Turner said.

Thousands turned out to honor and celebrate our veterans. There were so many families all wanting to say thank you. "I think it's important for us to bring our children to remember exactly what
our country stands for," San Jose resident Julie Herning said.

But beyond the pomp and circumstance. "Freedom isn't free, as we all know, there's a lot of sacrifices that are given," San Jose resident and Air Force veteran Zeke Garcia said.

This was an opportunity for veterans to reflect. "Back in my day, people weren't too nice to us, but today, a lot of support
and it makes a lot of us feel good," San Jose resident and Army veteran Baron Medeiros said.

One San Jose resident served in the Marine Corps for thirty years, but Wednesday was his first-ever trip to the city's Veterans Day parade. "I'm really happy I came because of the camaraderie of interacting and talking with other vets," San Jose resident and Marin Corps veteran Harry Relf said.

It's a bond that will never be lost among veterans. "We're all people. We're all here for the good of the country and to take care of each other," Relf said.

It's called All the Way Home. The goal is get housing for all of the estimated 700 homeless veterans living in the county.

The city and county will be committing up to $7.5 million dollars in housing and services for homeless veterans.

In the nation's capital, President Obama laid a wreath at Arlington National Cemetery, commemorating n the 97th anniversary of the end of WWI.

Obama said the nation is increasing funding for the Department of Veterans Affairs.

Honored to meet Vietnam Veteran Zeke Garcia of #SanJose, who served in the Air Force in the late 60's. #VeteransDay pic.twitter.com/5Z9xMjNmQD

This man served in the #Marines for 30 yrs. Today, he attended his 1st #SanJose #VeteransDay parade. Meet him at 4p. pic.twitter.com/0uUUlWpUBW

"My message today is simple: If you want to get the job done, hire a vet." —@POTUS #VeteransDay #HireAVet https://t.co/qqRueIRBKH

Pres. Obama lays a wreath at the Tomb of the Unknown Soldier at Arlington National Cemetery #VeteransDay pic.twitter.com/pxU74NAynM

WWII vet finds long-lost love 71 years later: "I fell in love with the way that she smiled." https://t.co/uen1c3A5hJ pic.twitter.com/fq45Bx3XBS

Today, we honor the incredible men and women who have served our country. Their sacrifice and selflessness is second to none.

Pres. Obama lays a wreath at the Tomb of the Unknown Soldier at Arlington National Cemetery in honor of #VeteransDay https://t.co/LFSkHLLVtn

On #veteransDay @sliccardo @DaveCortese team up to end veteran homelessness