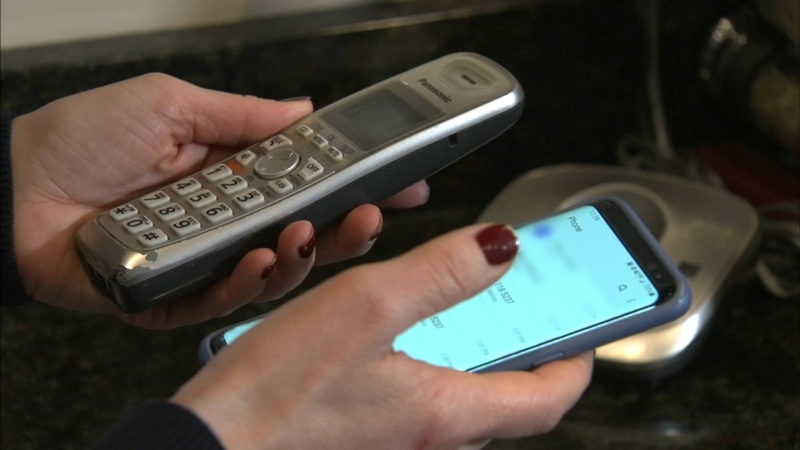 NAPERVILLE, Illinois -- An Illinois mom shared her heart-wrenching ordeal exclusively with the ABC 7 I-Team in order to warn other parents about "virtual kidnappings," the name the FBI has given to a frightening scam.

In a virtual kidnapping, criminals look to cash in on parents' fears of something happening to their child with fake stories of abductions.

"There was a child crying on the phone," she explained. "I have two kids, they are a year apart. It sounded like both of my kids crying. All of a sudden this guy gets on the phone and threatens and says if you ever want to see your daughter again you are going to do exactly what I say."

She quickly called 911 on another phone line so emergency responders could hear the kidnapping threats.

"I want to hear my daughter's voice. Please," Jamie says on the call, which was recorded by the 911 operator.

"No!" the man on the phone replies "You are going to do what I tell you to do, if you want to hear her alive again."

"Somehow I was able to get my home phone, I muted him, had both the phones on speaker and told dispatch 'be quiet just listen, someone has my daughter," said Jamie who was terrified, wondering if she'd ever see her daughter again.

In most of these kidnapping scam calls, the caller uses details from a child's or family's social media information to convince the victim that the kidnapping is real then demands a ransom, asking the parent to wire money.

In this case that 911 operator was able to warn Jamie that it was most likely a scam before she paid up.

Man: Whose there with you? (inaudible) What's going on?
Jamie: Nobody, I'm here by myself! I want to hear my daughter's voice, please!
911 Operator: Ma'am..
Jamie: Please!
Man: Who is there with you?
911 Operator: Okay, this sounds like it might be a scam phone call, do you know the phone number that it's coming off of?
Jamie: (crying) He just hung up, he just hung up with my daughter!

After the scammer hung up, Jamie raced to her children's school. Naperville police officers were also dispatched there to check on her daughter's well-being.

911 Operator: They are driving there.
Jamie: Ok. I could be there in two seconds. Ma'am you don't understand Ma'am, I'm--it's a block away, can't I please just drive there?
911 Operator: Yes I understand that, but the officers are on their way right now. So I can't...
Jamie: But it's my daughter, do you understand? So my cell phone number is...(redacted) I'm driving to the school okay, I have to hang up with you.

"I lost it when I saw the kids. My son came down first and then my daughter came down and I think I crumbled to the ground," Jamie recalled. "I crumbled, really crumbled. It felt real."

Naperville police told Jamie they could only conclude that the call came from Mexico. There is little hope anyone will be caught.

The FBI says these cases are difficult to investigate and prosecute because almost all of the subjects are in Mexico, and victims are told to wire money out of the country, making it difficult to trace.

The FBI also says many cases go unreported and investigators are encouraging parents to come forward so they can raise awareness and gather national statistics.

In most cases, the FBI says, if you get this call, never pay the money. Hang up and do your best to reach your child independently. If you do engage the caller to get more information, don't call out a loved one's name. Call 911, on another phone line.

MORE INFO FROM THE FBI

Virtual Kidnappings for Ransom (VKFR) refer to a range of telephone coercion schemes aimed at extorting quick ransom payments from victims who are manipulated to believe that they or their loved ones have been kidnapped or are at risk of being kidnapped. In many cases, a criminal will call the victim and threaten them over the phone, attempting to manipulate them into isolating themselves and sharing personal information about their families. Then the criminals use that information to target the victim's family members with ransom demands.

Many instances of VKFR remain unreported, and the FBI encourages victims to reach out to law enforcement.

Ransoms are generally around $1-2,000, and the ransom payment is often requested to be a series of payments to multiple people.

The FBI arrested the first subject for a virtual kidnapping in July 2017.

Virtual kidnappings previously originated exclusively from Mexico and focus on victims with ties to the U.S. who have been allegedly kidnapped in Mexico. The FBI has identified new trends with virtual kidnappings, including the expansion of calls from countries other than Mexico. These days, victims may be receiving calls from within the U.S.

MORE TIPS FROM THE FBI

The success of any type of virtual kidnapping scheme depends on speed and fear. Criminals know they only have a short time to exact a ransom before the victims unravel the scam or authorities become involved. To avoid becoming a victim, look for these possible indicators:

Callers go to great lengths to keep you on the phone, insisting you remain on the line.

Calls do not come from the supposed victim's phone.

Callers try to prevent you from contacting the "kidnapped" victim.

Calls include demands for ransom money to be paid via wire transfer to Mexico; ransom amount demands may drop quickly.

If you receive a phone call from someone demanding a ransom for an alleged kidnap victim, the following should be considered:

In most cases, the best course of action is to hang up the phone.

If you do engage the caller, don't call out your loved one's name.

Try to slow the situation down. Request to speak to your family member directly. Ask, "How do I know my loved one is okay?"

Ask questions only the alleged kidnap victim would know, such as the name of a pet. Avoid sharing information about yourself or your family.

Listen carefully to the voice of the alleged victim if they speak.

Attempt to contact the alleged victim via phone, text, or social media, and request that they call back from their cell phone.

To buy time, repeat the caller's request and tell them you are writing down the demand, or tell the caller you need time to get things moving.

Don't agree to pay a ransom, by wire or in person. Delivering money in person can be dangerous.