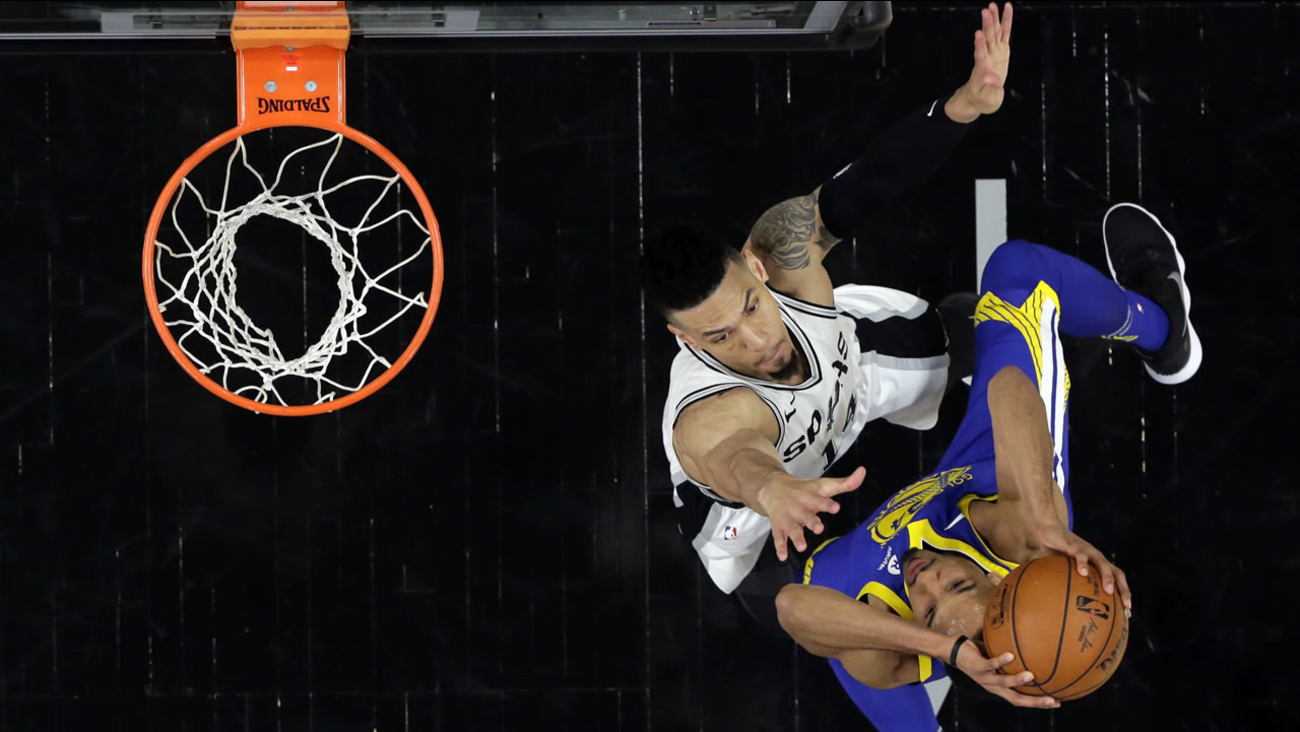 SAN ANTONIO (KGO) -- The Golden State Warriors had a slow start against the Spurs for Game 3 but ramped up as shots started falling and the offense started invading the paint in the later quarters.

Kevin Durant had 26 points, nine rebounds and six assists, and the Golden State Warriors beat San Antonio 110-97 on Thursday night for a 3-0 series lead over the Spurs, who were still reeling from the death of Gregg Popovich's wife, Erin.

Golden State can close the first-round series with a win Sunday afternoon in San Antonio in Game 4.

The Spurs were playing a day after the death of Erin Popovich, who passed away after battling an undisclosed long-term illness. Erin and Gregg Popovich were married four decades and had two children and two grandchildren.

San Antonio did not air a video tribute or hold a moment of silence for Erin in an apparent attempt to make the game as routine as possible for its players, but that was impossible.

Coach Popovich was not in his customary position roaming the sidelines, choosing instead to be with his family. San Antonio assistant Ettore Messina coached the team in Popovich's place.

"We are all hurting," Spurs veteran Manu Ginobili said after the morning shootaround. "We want to be next to Pop, we want to support him, but we've got to go out there and compete today. But, for sure, we are toiling. It's not an easy day to be here."

Ginobili and fellow veteran Tony Parker said it was tough to play basketball following Erin's passing, but the team's goal was to compete and play with the grit Popovich has always demanded of them.

Parker, who said Erin and Gregg were a mother and father to him when he entered the league as a 19-year-old, lived up to those wishes. Parker, who averaged 2.0 points in the first two games, finished with 16 points in 17 minutes.

The Spurs had an emotional start, but could not sustain it against the talented Warriors.

Already on the edge of their seats for the first home game of the playoffs, fans erupted when Rudy Gay threw down a one-handed dunk over Golden State's JaVale McGee. The cheering was nearly constant as the Spurs scored the game's first six points before the Warriors began to settle in.

Thompson added 19 points, including 3-for-6 shooting on 3s.

Golden State closed the first half on a 20-9 run to eliminate a five-point deficit and take a 52-46 lead. Durant had 17 points in the first half to counter 10 points each from Gay and Parker.

The Warriors led by double figures despite opening 1 for 14 on 3-pointers. Golden State finished 10 for 32 on 3s.